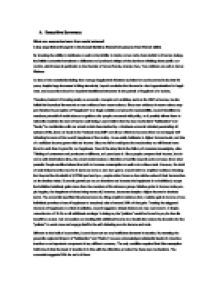 Executive Summary What can economics learn from social science? A lot; says Richard Layard in his Lionel Robbins Memorial Lectures from March 2003.

A. Executive Summary What can economics learn from social science? A lot; says Richard Layard in his Lionel Robbins Memorial Lectures from March 2003. By stressing the ability to habituate as well as the liability to rivalry as two main characteristics of human beings, the British economist formulates a deliberate and profound critique of the dominant thinking about public economics, which bases in particular on the theories of James Meade, Amartya Sen, Tony Atkinson as well as James Mirrlees. In view of the remarkable finding that average happiness in Western societies has not increased in the last 50 years, despite huge increases in living standards, Layard concludes that income is a bad approximation for happiness, and economics alone is a hopeless insufficient instrument in the pursuit of happiness of a society. Therefore, instead of focusing solely on economic concepts and variables, such as the GDP or income, he also builds his theoretical framework on new evidence from neuro-science. Since new evidence in neuro-science support Bentham's perception of "happiness" as a single variable and prove its measurability, Layard identifies tremendous potential of social science as guidance for people concerned with policy, as it possibly allows them to rationally maximize the sum of human well-being. Layard claims that the two mechanisms "habituation" and "rivalry" in combination with our actual model characterized by a dominant economic mindset penetrating all spheres of life, leave us stuck in the "hedonic treadmill" and all our efforts to become richer are so largely self-defeating in terms of the overall happiness of the society. ...read more.

The economist stresses that many consecutive symptoms of the credo of economic liberalism, such as high geographical mobility of workforce, less job security, higher unemployment rates or a strong liability towards change away from stability, etc., have serious and (often) not foreseen side effects changing the character of the society. Only by tackling these numerous non-income channels too, the variable "happiness" could be maximized. However, economics alone has obviously limited power to resolve such policy issues on its own. Layard identifies serious inadequacies in the Smithian argument of the "invisible hand" as a way to individual happiness. Even worse: "In fact the doctrine that your main aim must be self-advancement is a formula for producing anxiety!" What else is needed to make a society happier? Layard proposes a comprehensive approach, considering economic measures as well as extensive evidence from social science, and always aiming at the greatest happiness for all. The economist considers such an approach just as the logical consequence and accentuation of some innately human characteristics such as the need for social contacts, the inbuilt sense of fairness, the natural tendency towards cooperation, or the capability to rationally assess complex problems. Against this background, Layard acknowledges the Bentham's utilitarian view of life - most happiness for all - as the most suitable overarching moral principle and guidance in the pursuit of happiness. B. Evaluation By combining Bentham's approach with an economic mindset and undermining its rightness by referring to new evidence from social science, Layard presents a coherent and mainly convincing approach to public economics. ...read more.

Recommendation Presented in 2003, Layard's statements are still of great relevance for a wide audience, including (first and foremost) present or future policy-makers, economic and spiritual leaders, but also common citizens and employees - politically active or not. Layard's comprehensive approach has something for everyone. Especially today: the ongoing turbulences in the financial markets concomitant with a phase of growing disillusionment and scruples about the "rightness" of the neo-liberal model as well as the glorious return of government intervention, constitute a fertile ground for Layard's approach. To all of us the economist gives reasonable and profound explanations for pressing phenomena omnipresent in our daily life, but widely neglected and mostly tabooed. The verdict that money alone isn't a guarantee to happiness might be a commonplace. But do we not fail to respect this finding in our daily life? Did we understand the mechanisms at work before reading Layard? Even if Layard's ideas might appear not realizable at present, the economist sets us thinking and guides us a possible the way for future approaches to public economics, and (hopefully) an escape from the rat race. Now it is time to take matters in our own hands. Characters: 10'622 1 Ringen, S. (2007). What Democracy is For. Princton University Press, 2007 2 Ringen suggests that the upper class is able to heavily influence the political process by convincing the politically powerful middle class of the economic advantages of its leadership (argument of "efficiency"), or if necessary to use the threat of exit argument. ?? ?? ?? ?? Happiness: Has Social Science a Clue? - A Critical Review 4 ...read more.