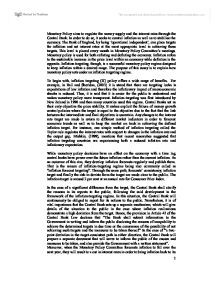 Explain how monetary policy works under an inflation targeting regime

Monetary Policy aims to regulate the money supply and the interest rates through the Central Bank. In order to do so, it seeks to control inflation as well as to stabilise the currency. The Bank of England, by being 'operational independent', can place targets for inflation and set interest rates at the most appropriate level in achieving those targets. This level is placed every month in Monetary Policy Committee's meetings. Monetary policy is used for both reflating and deflating the economy. Inflation refers to the sustainable increase in the price level within an economy while deflation is the opposite. Inflation targeting, though, is a successful monetary policy regime designed to keep inflation within a desired range. The purpose of this essay is to explain how monetary policy acts under an inflation targeting regime. To begin with, inflation targeting (IT) policy offers a wide range of benefits. For example, in Ball and Sheridan, (2003) it is stated that there are targeting locks in expectations of low inflation and therefore the inflationary impact of macroeconomic shocks is reduced. Then, it is said that it is easier for the public to understand and makes monetary policy more transparent. ...read more.

Hence, the provision in Article 42 of the Central Bank Law declares that "The Bank shall submit information to the Government in writing and inform the public disclosing the reasons of incapability to achieve the determined targets in due time or the occurrence of the possibility of not achieving such targets and the measures to be taken thereof." In the case of "a two-point deviation in the target-consistent path in either direction, the Central Bank will prepare a separate document that will serve to inform the public of the causes and measures to be taken, and also provide the Government with a written statement". Moreover, when the Monetary Policy Committee forecasts inflation to fall over the next year, they will result to a cut in interest rates in order to bring inflation back to its target level. In doing so, people will be encouraged to borrow more money from the banks. Regarding those who have mortgages, they will experience lower mortgage payments and have now more money to spend each month. The combination of these effects will have as an outcome the rise in the level of consumption and investment and thus the rise in Aggregate demand, as they are two of its main components. ...read more.

Then, the strategy is relevant until the next report is made and is presented at the end of Section 1 in the Monetary Policy Report. As mentioned in Svensson, (2007), until now, since its beginning in the early 1990s, inflation targeting has been a considerable success, as measured by the stability of inflation and the stability of the real economy. There is no support that inflation targeting has been harmful to growth, productivity, employment, or to other measures of economic performance. This success is both absolute and relative to alternative monetary-policy strategies, which include exchange-rate targeting or money-growth targeting. So far, there is no country that has abandoned inflation targeting after adopting it, or even expressed any regrets. For both industrial and non-industrial economies, inflation targeting has showed to be the most flexible and resilient monetary policy regime, while it has succeeded in surviving a number of large shocks and disturbances. To conclude, taking all of the above aspects into account it can be said that inflation targeting is an economic policy in which a central bank assesses and publishes a "target" inflation rate and then tries to have an actual inflation close to the target through the use of interest rate changes and other monetary tools. Inflation targeting has been very successful and had been adopted by more than 20 industrialised and non-industrialised countries up to 2007. ...read more.