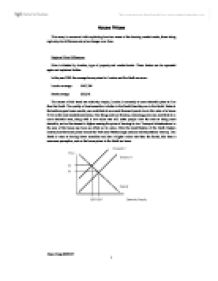 Explaining how two areas of the housing market works, these being regional price difference and price changes over time.

This essay is concerned with explaining how two areas of the housing market works, these being regional price difference and price changes over time. Regional Price Differences Price is dictated by location, type of property and market trends. These factors can be seperated again and explained further. In the year 2001 the average house prices for London and the North are as so: London average: �147,704 North average: �53,951 The causes of this trend are relatively simple; London is currently a more desirable place to live than the North. The quality of local amenities is better in the South than they are in the North. Schools that achieve good exam results, can contribute to a several thousand pound rise in the value of a house if it is in the local encatchment areas. Also things such as libraries, swimming pools can contribute to a more desirable area, along with a low crime rate will make people view the area as being more desirable, and so the demand is higher causing the price of housing to rise. Transport infrastructures in the area of the house can have an effect on its value. After the electrification of the North Eastern railway line the house prices around the York and Peterborough mainline railway stations went up. ...read more.

This is to say that certain features in certain areas will make the value of the property increase. This is also true of extra bedrooms, loft conversions to make extra rooms add to the value of the house, however dividing rooms up which creates more rooms in the same floor space however does not add to the value of the house. Land availability is also a crucial point in deciding the value of a house. In Greater London there is no more land available to build on, and many preservation orders on existing buildings, this means that very few modern buildings can be build, and only when an existing building is demolished. This leads to artificially high prices in London due to the lack of land, whereas a new house in an housing estate built in a Greenfield area such as Ingelby Barwick near Stockton houses are much cheaper as there is a lot of available land to build on. In the above paragraphs I have outlined the theories behind why location of a house effects the value, and how the type of house in the same area effects the value of a house. ...read more.

This has happened recently, as interest rates have hit an all time low under the guidance of the Bank of England thus meaning mortgages have become more affordable and so more people have been buying houses and so the value of houses have increased. 'Unemployment levels' is the final factor in explaining why house prices fluctuate once adjusted for inflation. During times of high unemployment people have less money in general and so less people can afford to buy houses, therefore the demand is lower and the value of houses drops below the rate of inflation. The above factors: Unemployment, Interest Rates, Government Policy and Economic Growth all effect the housing market and cause house prices to fall or exceed the rate of inflation. Government Policies can cause a lack of consumer confidence, leading to a downturn industry leading to job losses and market values of houses falling below inflation. The opposite can also happen and boom can happen with house costs rising above the rate of inflation. The market follows a cyclical pattern, with times boom causing houses to rise above the rate of inflation before a period of recession the stabilisation before the whole process repeats itself. House Prices Adam Craig 08/05/07 I ...read more.