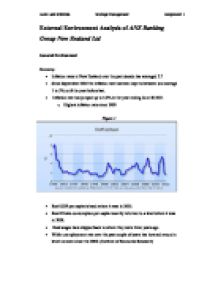 External Environment Analysis of ANZ Banking Group New Zealand Ltd General Environment Economy: * Inflation rates in New Zealand over the past decade has averaged 2.7 * Since September 2002 the inflation rate has been kept to between and average 1 to 3% until the year before last. * Inflation rate has jumped up to 5.3% in the year ending June 30 2011 o Highest inflation rate since 1990 Figure 1 * Real GDP per capita is back where it was in 2005. * Real Private consumption per capita recently returned to a level where it was in 2008. * Real wages have slipped back to where they were three years ago * While unemployment rate over the past couple of years has hovered around a level not seen since the 2000. (Institute of Economic Research) Figure 2 New Zealand consumer confidence eased in March as cautious consumers remained focused on debt. Consumers are sending mixed signals about how they feel in an ANZ-Roy Morgan survey. (NZ Herald.) * Auckland the most confident city on 118.5,. * Wellington recorded the largest drop falling 13 points to a national low of 100.9. ...read more.