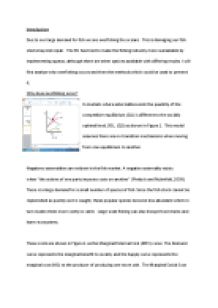 Externalities and overfishing in the fishing industry

﻿Introduction Due to our large demand for fish we are overfishing the oceans. This is damaging our fish stocks beyond repair. The EU has tried to make the fishing industry more sustainable by implementing quotas, although there are other options available with differing results. I will first analyse why overfishing occurs and then the methods which could be used to prevent it. Why does overfishing occur? In markets where externalities exist the quantity of the competitive equilibrium (Q1) is different to the socially optimal level, SOL, (Q2) as shown in Figure 1. This model assumes there are no transition mechanisms when moving from one equilibrium to another. Negatives externalities are evident in the fish market. A negative externality exists when ?the actions of one party imposes costs on another? (Pindyck and Rubinfeld, 2009). There is a large demand for a small number of species of fish. Since the fish stock cannot be replenished as quickly as it is caught, these popular species become less abundant which in turn makes them more costly to catch. Large-scale fishing can also disrupt food chains and harm ecosystems. These costs are shown in Figure 1 as the Marginal External Cost (MEC) curve. The Demand curve represents the marginal benefit to society and the Supply curve represents the marginal cost (MC) to the producer of producing one more unit. The Marginal Social Cost (MSC) ...read more.

Figure 3 shows how a quota set at the SOL affects surplus. The supply curve becomes inelastic at Q2, and the price increases to that which consumers are willing to pay for the new quantity, P2. The difference between what consumers are willing to pay and what they actually pay, consumer surplus, is now area A. Area B becomes producer surplus (the difference between what producers need to receive and what they get) and area C becomes part of the deadweight loss. Producers have lost area E so their surplus is now B+D and the total deadweight loss is area C+E. Consumers have lost out and, depending on the elasticity of supply and demand, producers may have either lost or gained. Overall, the deadweight loss shows that there is a loss to society associated with a quota. If the MEC has been overestimated the quota will be too low, needlessly reducing surplus. If it has been underestimated, the quota will be too high and the quantity caught will be unsustainable. Quotas are placed on the most popular species of fish so fishermen supply alternative species to fill the demand, causing problems. For example, nets used to catch sole have a small mesh which results in cod being caught as by-catch. These then have to be discarded as cod quotas have already been met, meaning no producer surplus can be gained (Channel 4, 2011). ...read more.

If MEC has been estimated incorrectly, there will be the same problems as with a quota. The tax revenue, B+D, could be used to fund research to find MEC more accurately. Enforcing laws which only allow fish to be caught for human consumption would limit the demand fishermen could legally supply to (Monbiot, 2011). This would shift the demand curve down which would also reduce the social equilibrium so the new quantity may be more sustainable but will not be socially optimal. Also there is a larger deadweight loss than in the case of a quota (Figure 6). Alternatively they could raise awareness of overfishing as has been done with CO2 emissions to reduce demand for fuel. However there will probably be the same overall demand for fish, only some will be shifted to other species. If demand is shifted to fish caught in a smaller mesh net, as previously explained, the number of popular fish caught ? and therefore MSC ? may not decrease. Decreasing the number of fish which can be caught inevitably means fewer fishermen are employed. Fishing would not need to be reduced if the socially optimal level could be increased i.e. if the MEC, and therefore MSC, could be reduced (Figure 8). Legislation preventing unsustainable fishing methods would achieve this. Conclusion There are various methods which could be used to make the fishing industry more sustainable, all with their own drawbacks and which need the co-operation of all countries to be implemented effectively. ...read more.