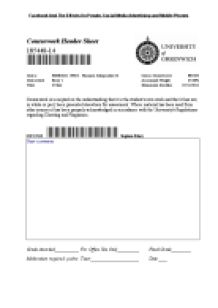 Facebook And The Effects On People, Social Media Advertising and Mobile Phones

Businesses need customers to develop and grow. Social media advertising acts has the word of mouth marketing. Business today may need to adopt this new type of marketing. In his book The New Influencers, Gillin (2007) points out that "Conventional marketing wisdom has long held that a dissatisfied customer tells ten people. But that is out of date. In the new era of social media, he or she has the tools to tell 10 million "(p. 4) Using Gillin`s approach to social media, Facebook could become a distinctive and successful marketing approach for many business. However how do managers of marketing increase the ability to use the word of mouth marketing through Facebook? Companies may be able to determine online discussions through Facebook to increase sales of a product or service. "Facebook groups and other forms of online communication have sprung up around Steven Spielberg`s movie Indiana Jones and the Kingdom of the Crystal skull, and other films " (Mangold & Faulds 2009, p 361). Social media advertising may then be thought more by businesses as a worthwhile investment. This section of the paper has identified some key benefits of social media advertising. These include increased word of mouth marketing which is proven to be successful and the fact that businesses should adopt the new advertising media, otherwise they may fall behind in their trade according to Brown (2010). However there could be some disadvantages of using Facebook has social media advertising by businesses. Businesses may be concerned about how much money to spend on commitment to users that any information obtained from them will not be misused (Hensel & Deis, 2010). Businesses may then face an uphill battle to gain customer loyalty. Furthermore, businesses may be more careful in using Facebook has social media advertising. Whilst privacy settings on Facebook may involve potential customers, the advertising industry itself may be suffering some disadvantages through social media advertising. ...read more.

Facebook has certainly taken advantage of the mobile phone market by allowing manufactures to put Facebook on their phone. From a negative stand there are small signs of evidence to suggest Facebook on mobile phones is not so appetizing. This study identified evidence that Facebook on mobile phones is an beauty tool cyber bullying. Although Facebook is not the main contributor to cyber bullying it is having an impact on this topic. Therefore there are pros and cons of Facebook in the mobile phone industry. This essay has only briefly looked at the effects of Facebook has had on Mobile phones. Further research to determine any adverse effects on society itself through Facebook and mobile phones would need to be conducted. However, the story of Facebook and social media marketing would take a positive one from the findings of this essay. The story of Facebook and social media advertising is a successful one, from the business point of view and many businesses would be wise to incorporate this type of advertising. It would seem a straightforward success means to advertise on Facebook. However, the way in which companies operate about this and how much money is invested is another obstacle. Furthermore, not all businesses may decide that social media advertising is the right their business. While social media advertising has been a fascinating study in this essay, the effects Facebook has on humans themselves has been even more intriguing. Facebook is not just a social network site it has the power to influence how people behave and live. This may worry some individual's, as the site is all about people's lives online. Many people seem to embrace the power of Facebook and the founder of Facebook, Mr Mark Zuckerberg wins in creating an online digital world. However," what is more" problematic and concerning is this study shows some slight indications that Facebook has a negative impact on humans. There are dangers of using Facebook, and whilst this study carried out no original research to support this statement. The following paper will examine the effects of Facebook on humans. ...read more.