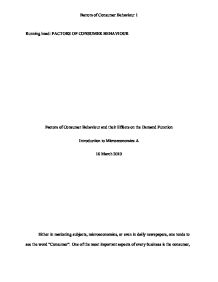 Factors of Consumer Behaviour and their Effects on the Demand Function

Running head: FACTORS OF CONSUMER BEHAVIOUR Factors of Consumer Behaviour and their Effects on the Demand Function Introduction to Microeconomics A 16 March 2010 Either in marketing subjects, microeconomics, or even in daily newspapers, one tends to see the word "Consumer". One of the most important aspects of every business is the consumer, or one who utilizes their product. From the consumers comes the concept of consumer behaviour. When talking about that one means the decision processes and acts of people involved in buying and using products (Fahy & Jobber, 2009). Businesses need to understand consumer behaviours whilst making their products in order to get a sufficient amount of demand. In other words, firms need to create products based on customers' demands and especially concentrate on maximising their utility. The first concept of economics that links to consumer behaviour is demand. The demand curve is what determines the quantity of a certain product a consumer needs (Sloman, 2007). Consumer behaviour is one of the main factors that affects the demand curve based on people's incomes, tastes and preferences, and of course social factors. ...read more.

These types of decisions are made by businesses in general in response to consumer behaviour. Companies therefore make their products based on consumer behaviour. There are various factors that are considered in this area such as socio-cultural and psychological factors. One describes culture as basic significances, perceptions, needs and wants and behaviours learned by family and other establishments. Culture is the most basic cause of a person's wants and behaviour. Every group or society has a culture. Cultural influences on consumer behaviour may diverge from country to country. Cultural factors are divided into three groups which are (i) Culture, (ii) Sub Culture, and (iii) Social Class (Rowley, 1999). A culture is basically contained of various subcultures; which are composed of groups of people sharing the same values, experiences, and situations. One could exemplify subcultures by nationalities, religions, racial groups, and geographic regions. Due to subcultures, companies can also target market segments in order to create products that are suitable for each subgroup (Fahy & Jobber, 2009). Last but not least, social and cultural factors in consumer behaviour also include social class. Every society has a certain form of social structure. ...read more.

In other words, a consumer's perceptions are received through their senses of sight, taste, hearing, smell and touch. The ability to understand individuals' capacity to learn is essential as well. Which is why marketers are very keen on advertising in the most creative way; if businesses do not make their product known in the world, especially if it is the introduction, there are less chances for products to be sold rapidly. In conclusion, being aware of consumer behaviour is one of the fundamentals of business. In every way, the consumer has to power. Businesses would not function properly if they do not know what types of products to make in order to suit and satisfy consumers' demands. Demand is part of the economy. Without demand for anything, production would not be possible as it would result in an excess in supply. This is why businesses have to be very vigilant in making their products, such as focusing in small groups (teenagers, high class individuals etc.), making sure of being ethical based on the countries' cultural values and the environment (due to the fact that it has become such an important feature consumers tend to focus on whilst buying), and many of the factors that this essay has discussed. ...read more.