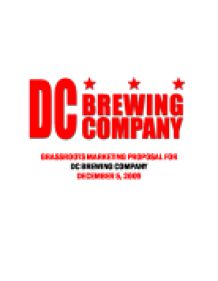 GRASSROOTS MARKETING PROPOSAL FOR DC BREWING COMPANY DECEMBER 5, 2009 Grassroots Proposal for DC Brewing Company Executive Summary DC Brewing Company is Washington, D.C.'s only microbrewery and is dedicated to brewing beer of the highest quality in small batches. As the makers of L'Enfant Lager, Statehood Stout, Rock Creek Red Ale, U Street Porter, Adams Morgan Amber and Capitol Hill Pale Ale, DC Brewing Company has the long-term objective of becoming one of the premier microbreweries in the United States. But in its first year of operation, the goal is more modest. DC Brewing Company must first establish itself as Washington, D.C.'s premier microbrewer. DC Brewing Company has already established a robust online presence including Twitter feeds, Facebook pages and a highly interactive website with a brewing blog. Now the company must establish its name through effective grassroots techniques and word-of-mouth marketing in order to accomplish the immediate objective of increasing sales an average of $25,000 in each month of 2010, which is an annual increase in sales of $300,000. Microbrewing Today Snapshot of the Microbrewery Industry 2008-09 Growth of the craft brewing industry in the first half of 2009 was 5% by volume and 9% by dollars. Craft brewers sold an estimated 4.2 million barrels of beer in the first half of 2009, up from 4 million barrels in the first half of 2008. Overall US beer sales are down 1.3% in the first 6 months of 2009. Imported beer sales are down 9.5% in the first 6 months of 2009. ...read more.

This is another example of reaching out to your talkers and connecting with them. These beer enthusiasts are the target audience for DC Brewing Company and when they find a beer they like, they blog about it and tell all their brewing friends. To quote the AccidentalHedonist.com again, "For the micro-brew fan, the best beer out there is the one they haven't tried yet." Strategy 2: Target "foodies" in the mid-Atlantic region Tactic 1: Hold invitation-only dinners where local chefs pair food with each style of beer DC Brewing Company produces. A Sept. 2009 Epicurious.com article suggests that beer may actually be more compatible with food than wine. Such a thought was once considered blasphemous, but is now gaining acceptance with the wide variety of innovative and creative craft beer available. According to blogaboutbeer.com, chefs are creating menus to match beer in ways once reserved only for wines. We feel quality beers like those from DC Brewing Company should be matched with more than pretzels or chips. DC Brewing Company will provide attendees with a list of their beers, where to get them and the recipes the dishes that are paired with beer. Tactic 2: Pair DC Brewing Company beers and food at Taste of D.C., D.C. Chili Cookoff, D.C. Beer Week 2010 events and SAVOR: An American Craft Beer & Food Experience. We will work with local chefs who are also trying to make their way in the industry to match food with DC Brewing Company beers. The DC Brewing Company and the selected chefs will cross promote each other's products, further expanding our exposure at the events. ...read more.

The most effective quantitative measure will be sales, and since we have a financial goal, this will be the one true indicator of whether these techniques succeed. We will also measure the campaign through the growth of the customer database, number of Facebook fans and Twitter followers and number of people who sign up for the DC Brewing Company's Founders Club. Qualitatively, we will talk to people formally and informally. Formally, we propose focus groups to see if DC Brewing Company's local microbrewery message resonates with local beer drinkers. Informally, we propose surveys and feedback opportunities on the website and social media sites, which will be constantly monitored and responded to proactively. The company's representatives at all events or appearances will foster two-way communication between the potential customer and the company. What people say matters and will be factored into decisions made going forward. Conclusion Despite a drop in sales industry wide, we believe there is enough interest and demand for a well-made craft beer. With the proper grassroots and word-of-mouth tactics DC Brewing Company can capture enough market share in the mid-Atlantic region to achieve its 2010 goal of increasing sales by an average of $25,000 in each month of 2010, which is an annual increase in sales of $300,000. The "SMART" strategies outlined above call for specific actions to achieve measurable increases of sales using realistic efforts within the upcoming calendar year. Microbrew aficionados are constantly looking for the next great beer. We believe in the product created by DC Brewing Company and believe that it is a product that will be able to gain ground in the mid-Atlantic region. We look forward to speaking with you. ...read more.