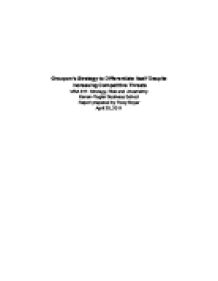 Groupons Strategy to Differentiate Itself Despite Increasing Competitive Threats

Groupon's Strategy to Differentiate Itself Despite Increasing Competitive Threats MBA 811: Strategy, Risk and Uncertainty Kenan-Flagler Business School Report prepared by Tracy Boyer April 29, 2011 Executive Summary With fierce competition from countless competitors, Groupon faces increasing uncertainty regarding its product positioning as it pursues its IPO. Specifically, it must continue to differentiate itself in the web and mobile markets to retain and grow its customer base. Groupon should diversify its product offering and position itself as a hyperlocal digital platform rather than a daily coupon service to provide future opportunities for expansion. This classic diversification strategy will enable Groupon to handle the level three risk it faces amidst growing competition (as seen in Exhibit 1). Background Groupon was founded in 2008 by Andrew Mason, a 2003 music graduate of Northwestern University. The idea for Groupon came from Mason's other start-up at the time, The Point, where users could rally around a certain idea to create a tipping point. When it came time to monetize the site, Mason determined three potential avenues: 1) sell advertising on the site, 2) take a piece of the fundraising, or 3) collective buying.1 Using the latter strategy, Mason founded Groupon to sell localized daily coupons. Each day, Groupon provides its users with one deal, which is activated once a certain number of people buy the coupon. ...read more.

A recent Nielsen study found that while LivingSocial and Groupon's users are both likely to be female (roughly 67%), other demographic data across the two sites vary dramatically. For instance, LivingSocial users tend to be wealthier, younger and live in the South and Pacific regions, whereas Groupon's users tend to be older and more highly concentrated in the Northwest.8 One strategy LivingSocial is using to differentiate itself is rolling out LivingEscapes, which promotes hotel deals and other getaway opportunities. Groupon has yet to enter this market, although GreatEscapes is another private online website operating in this same space. LivingSocial has seen varied success in its past travel deals, ranging from only 301 buyers for a six-night trip to Costa Rica to a more notable 5,473 buyers for a one-night stay at Arizona Grand Resort.9 Facebook Places During the month of April 2011, Facebook rolled out a location-based coupon offering with its Facebook Places product. Currently, it is offered in five cities: San Francisco, Austin, Dallas, Atlanta and San Diego. Facebook plans on deploying daily emails to promote its deals, along with publishing them on users' Facebook walls.10 With more than 500 million active users, Facebook already has more than 41 times the user base compared to Groupon. ...read more.

found that "more than 1 in 4 global consumers [are] saying content and apps are a key consideration at the point of purchase."13 While Groupon currently has a mobile app, it only pulls in the standard daily deal. However, it should utilize geolocation information, the check-in gaming phenomenon and the social networking hype in order to develop a highly customized and personal hyperlocal experience. This can be done by allowing users to check-in at certain places, and then delivering deals for nearby merchants that users can utilize in real time. Recommendation By diversifying Groupon's strategy into a collection of different strategic investments - deal-of-the-day coupons, social networking, check-in gaming and hyperlocal information delivery - Groupon will garner more stable returns over the long run. Exhibit 1: Hugh Courtney's four levels of uncertainty Note: Due to the large uncertainty within the deal-of-the-day digital coupon market, fierce competition and further potential entrants, Groupon faces level three uncertainty where a range of futures is possible. Thus, a classic diversification strategy is vital for Groupon to protect itself from residual uncertainty. Exhibit 2: VRIN Analysis Valuable: 12 million users; 5,000 sales force; 500+ locations Rareness: N/A Inability to imitate: Non-compete contract with merchants14 Non-substitutable: Only for consumers in places with no alternative - increasingly less 1http://www.chicagomag.com/Chicago-Magazine/August-2010/On-Groupon-and-its-founder-Andrew-Mason/ 2http://sales-jobs.fins.com/Articles/SB130090099092197185/Salespeople-Fuel-Growth-at-Groupon-Living-Social 3http://www.businessinsider.com/why-groupon-said-no-to-google-2010-12 4http://www.crunchbase.com/company/groupon 5http://tucsoncitizen.com/usa-today-news/2011/04/17/try-it-local-spreads-groupon-like-deals-across-the-country/ 6http://www.chicagomag.com/Chicago-Magazine/August-2010/On-Groupon-and-its-founder-Andrew-Mason/index.php?cparticle=2&siarticle=1#artanc 7http://www.crunchbase.com/company/livingsocial 8http://www.foliomag.com/2011/study-significant-differences-between-groupon-and-living-audiences 9http://escapes.livingsocial.com/deals/past 10http://www.cnn.com/2011/TECH/social.media/04/26/facebook.deals.launches.mashable/ 11http://voices.washingtonpost.com/fasterforward/2011/01/google_offers_confirmed_google.html 12http://www.businessinsider.com/chart-of-the-day-foursquare-users-2011-3 13http://discovermobilelife.com/wp-content/uploads/2011/03/Mobile_Life_Press_Release.pdf 14http://www.quora.com/What-is-Groupons-strategy-for-defending-its-position-in-the-group-buying-space 7 ...read more.