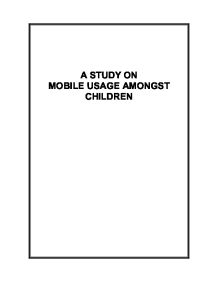 GSM Mobile Study - the mobile phone market in India, and research into phone use by children.

A STUDY ON MOBILE USAGE AMONGST CHILDREN Table of contents Introduction 4 Indian Mobile Industry 9 Details of service providers 19 Sampling Plan & Respondent profile 23 Sampling plan 23 Respondent's profile 25 Mobile phone ownership and usage by children 30 Mobile phone ownership among children 30 Children's age to start using a mobile phone 34 Reason to own a mobile 37 Mobile phone Usages 46 Expenditure for mobile phone use and its charges based on usage 47 Selection of Network Service Provider 53 Media Analysis 55 Durables owned in the household 55 Media usage 57 Functions of mobile phones used by children 59 Functions of mobile phones used by children 60 Importance of features while selecting a mobile phone 64 Mobile network service use by children 65 Life style Analysis 69 Target of communication 69 Trends among children without mobile phones and market maturity 74 Trends in children without mobile phones 74 Maturity of mobile phone market targeted at children 77 Demographics 82 Childs education profile 82 Occupation of parents 83 Education level of Parents 84 House hold income 85 No of people in household (other than respondents i.e. one parents) 86 Summary 89 References 94 Chapter 1 INTRODUCTION This chapter highlights the followings.... 1. India as a country & its major economic indicators 2. Indian mobile industry & wireless services 3. Details about service providers present in India 4. Average Revenue per user (ARPU) & 5. Minutes of usage (MoU) Introduction India is one of the oldest civilizations in the world. It has achieved multifaceted socio-economic progress during the last 59 years of its Independence. India has become self-sufficient in agricultural production, and is now the tenth industrialized country in the world and the sixth nation to have gone into outer space to conquer nature for the benefit of the people. It covers an area of 32, 87,263 sq km, extending from the snow-covered Himalayan heights to the tropical rain forests of the south. ...read more.

When metro/ bigger cities and smaller cities are compared, 22% of metro (bigger city) children have a mobile phone in comparison to 24% in smaller cities. The gap between Metro and smaller cities, therefore, is minimal at 2% which is not significant. Please note that, for this report as a whole, metro/ bigger cities are represented by Delhi, Mumbai, Chennai, Kolkata, Bangalore, Hyderabad and Pune, whereas Cochin, Ludhiana and Patna represent the smaller cities. Hence location-based difference in ownership does not seem to exist among children. Children from both the location seem to have an identical mobile ownership. Parents' with income level between Rs 10,000 and Rs 15,000 are the highest group who are currently providing mobile phones to their children's. 5 As we see from this graph that there is positive co-relation (Ownership increase as income increases and shared usage of mobile decreases as income increases) between income and ownership of mobile among children. Children's age to start using a mobile phone The below graph shows the age of children's starting using mobile. A majority of children's start using mobile phones at the age of 8 to10 years. Start of mobile phone in early age could be explained by lack of urban infrastructure (like lack of public telephone booth / lack of pubic transport system in India), novelty factors attached with category and habit of show off among Indian parents. There is not much gender difference in the age at which children start using mobile phone There is not much SEC difference in the age at which children start using mobile phone The reason why parents let their children have a mobile phone and why children want to have a mobile phone Reason to own a mobile The below graph shows the reasons why parents get their children a mobile phone, The most popular answer is 1) the ability for parents to always reach their children and 2) ...read more.

'Games' is one word children's like in mobile phones. And almost 97% of the children who use mobile phone spend their time in playing games. Unlike teenagers who use messaging services most often to communicate, children however prefer to make and receive calls, which are easier and more convenient. Children's use the mobile services mainly for arranging to meet someone through voice calls and messaging services mainly to communicate on how they are feeling. Children agree on the fact that mobile phones are fun to use and without having a mobile phone would make them feel inconvenient and insecure. Children in India like to give either landline number or their mobile numbers to their friends rather than communicating through E-mails. Battery life is one of the most important features which children look forward while selecting their mobile phones, this can be attributed on the fact that children like to play games in their mobile. More than fifty percent of the children who currently do not own a mobile phone would definitely like to have their own mobile phones and one of the important factors driving them is because their friends have started using mobile phones. It can be also seen more than fifty percent of the children's close friends use a mobile phone. Parents in India join their children's to tuitions and coaching classes, which are usually conducted after the school hours. And children feel having a mobile phone helps them to communicate with their family when they are coming late. Many children who do not want a mobile phone feel since parents have a mobile it does not matter whether they have a mobile phone or not. In short from the above study, it can be summarized that mobile phones have become popular among children's and there is a growing trend among children to have their own mobile phones. 1 Source: CII 2 Source: China's Ministry of Information Industry (MII) 3 1 USD is equivalent to INR 44. 4 Source: TRAI 5 Due to low base in chart 3.4 data is being not represented beyond Rs 40000/- ?? ?? ?? ?? 5 ...read more.