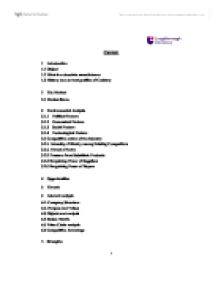 History and current position of Cadbury.

Content 1 Introduction 1.1 Object 1.2 What is a chocolate manufacturer 1.3 History and current position of Cadbury 2 The Market 2.1 Market Share 3 Environmental Analysis 3.1.1 Political Factors 3.1.2 Economical Factors 3.1.3 Social Factors 3.1.4 Technological Factors 3.2 Competitive nature of the industry 3.2.1. Intensity of Rivalry among Existing Competitors 3.2.2. Threat of Entry 3.2.3 Pressure from Substitute Products 3.2.4 Bargaining Power of Suppliers 3.2.5 Bargaining Power of Buyers 4 Opportunities 5 Threats 6 Internal analysis 6.1. Company Structure 6.2. Purpose and Values 6.3 Objects and analysis 6.4 Boston Matrix 6.5 Value Chain analysis 6.6 Competitive Advantage 7. Strengths 8. Weaknesses 9. Strategic Options 9.1. Market penetration 9.2. Market development 9.3. Product development 9.4. Diversification 10. Strategic Choice 10.1. Summary of options 10.2 Evaluation 11. Implementation plan 11.1 Develop New Product 11.2 Package Design 11.3 Brand Name 11.4 Launch Strategy 12. conclusion 12.1. Key findings for the industry 12.2. Key findings regarding Cadbury 12.3. Findings and recommendations Reference Appendix 1. Introduction 1.1 Object This project will firstly provide a general review of the UK chocolate confectionery manufacturer of Cadbury's in recent years. Secondly, I would use PEST frameworks and Porter's five fundamental forces of competition to discuss how the competitive dynamics with and around Cadbury's are changing and what influences have on Cadbury's. Thirdly, I would do the internal analysis of Cadbury's and do the SWOT analysis for Cadbury's. Moreover, I also did a questionnaire to discover information on the public's general view of the confectionary market and what products they would like to see next released. Combining with the analysis and date, I will have to design the new confectionary product, and then suggest ways in which it can be marketed. 1.2 What is a chocolate manufacturer As long as a company which produces chocolate is called a chocolate manufacturer. Such as the big three chocolate companies: Cadbury's, Masterfoods and Nestl� Rowntree in the UK. ...read more.

With the growing PDI, customers will have more money to buy chocolate and it will be beneficial to Cadbury. In addition, with the changing lifestyle, it is good opportunity for Cadbury to increase its sales. With regards to the obesity issue, Cadbury can launch low-fat product to target the emerging segment. Moreover, with the development in technology, Cadbury will be able to enhance its quality. In terms of the nutrition, sponsorship for sporting events can be done. Also, making of diversify into a different market, expand nationally and promote using large marketing strategies. As Student Media (2004) noted, Cadbury's has still got a lot large room for expansion into South Africa, Asia and South American regions. It explained that Cadbury's could look to develop new products in new markets. Due to the growing product range Cadbury's could launch new products. Cadbury's could diversify into new markets e.g. Breakfast Cereal Market. 5. Threats The biggest threat is the concern about high-fat in chocolate. Cadbury's might lose it sales because consumers are aware of the high-fat which chocolate contains. As Student Media (2004) noted, healthier options could cause problems to Cadbury's with trends tending to favour the new healthier options. Also, Cadbury's main competitor Nestle is launching a new product and more companies diversifying into the chocolate market which results in a large price war, taking Cadbury's off the market. As Student Media (2004) pointed out that Cadbury's have got a lot of competitors in the market and must be wary of their position as market leader. It also explained that the pricing on their products is too high Cadbury's could lose sales if a competitor was to launch a new product to rival Cadbury's best sellers and new products from competitors could cause problems to Cadbury's as they could begin to lose their market share. The fair-trade issues will also be a threat to Cadbury since the pressure to buy the fair-trade cocoa and will enhance Cadbury cost for the cocoa beans. ...read more.