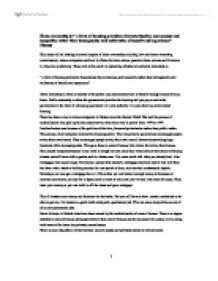 Home ownership is &quot; a form of housing provision characterised by unevenness and inequality rather than homogeneity and uniformity of benefit and experience&quot; Discuss

Sustainability of an initiative depends on it being sufficiently well targeted to meet government objectives without targeting being so tight as to constrain public demand too severely. For example, cash incentives are very popular with those public sector tenants who are eligible and could afford to purchase with the aid of a grant but the numbers in this category are relatively small and are diminishing. Even with this level of targeting the levels of additionally are low and the extent to which the initiative meets government objectives is questionable" (Morgan, 1998) It also seems likely that the government is going to use low cost home ownership schemes more in the socially rented sector for those in low paid employment rather than building new social rented dwellings. (Morgan, 1998) The government has also helped with grants to homeowners. This was more common in the 1940's when the grants were to houses and not to the homeowners. Grant-aid in the late 1940's provided the finances to carry out repairs and improvements and was there to compensate the landlord for the effects of rent control (that had been introduced after the First World War) ...read more.

In conclusion it can be seen that homeownership does promote inequalities. Inequalities are created between homeowners, those who rent and those who live in council houses. There is unevenness within homeownership as it is seen as a status symbol. For instance a private home in Newlands in Glasgow is looked upon differently to one in Easterhouse. A house in London costs more than it would in Glasgow. You can pay a lot of money for a small house in London, and the same amount of money would get a much larger house in Scotland. This is an example of the unevenness throughout the private sector. There is also social exclusion for those who don't own their own houses, although the government is trying to combat this inequality. There are inequalities and unevenness throughout the housing market but also throughout the private sector itself. There is no homogeneity as is suggested by Forrest, Murie and Williams's only inequality. There is certainly no benefit of experience as more and more people are getting into mortgage arrears and having their homes repossessed because of money being lent out too eagerly. The "benefit of experience" would suggest that we learn from mistakes but just now it seems to be the opposite with still too few taking out insurance against repossession and mortgage arrears. ...read more.