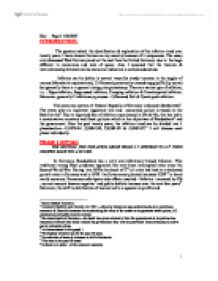 Kay Page 1 5/8/2007 INTRODUCTION. The question asked the identification & explanation of the inflation trend over twenty years. I have chosen German as my country because of it uniqueness. The essay only discussed West Germany and not the east then the United Germany due to the huge different in economics and lack of space. Also I assumed that the theories & interrelationship between varies economic indicators is welled understood. Inflation can be define in several ways.1)a steady increase in the supply of money (Monetarist explanations), 2) Demand persistently exceeds supply.(Phillip curve) but generally there is a general rising price persistency. There are varies type of inflation, i.e. : Hyperinflation, Suppressed inflation, Creeping inflation & Unanticipated inflation. Moreover ,generally 2 inflationary process-1)Demand Pull & 2)cost-push inflation. The economic system of Federal Republic of Germany is Soziale Marktwirtsh1. The states play an important regulatory role and economics policy is based on the Stability Act2. Due to ingrained fear of inflation experienced in 20s & 40s, this has led to a conservative monetary and fiscal policies which is the objectives of Bundesbank3 and the government. Over the past twenty years, the inflation trend can be divided into 4 phase/section-1)1978-84 ,2)1984-90, 3)1990-93 & 4)1993-97.4 I will discuss each phase individually. PHASE 1 (1977-84) THE SECTION ,THE INFLATION GROW FROM 2.7 UPSERGE TO 6.35 THEN DROPED BACK TO3.4 IN 1983. ...read more.

or lower expenditure pushed the current account into negative & deficit sky high. The immediate impact was at first a economic boom in late 80s but then the budget and capacity could not cope. Federal government has struggle to bring spending under control15, Bundesbank try to tighten its monetary policy in 1992-3 16 which in turn led to a full blown recession in 1993. Recession over Europe has hinder/delay the recovery by export trade17 in the economic crisis. Hence production although albeit increased but has extended to enlarged Domestic market, in turn causing inflation to rise to 5.1% in 1992. However in 1993, rising corporate profit, achieved through much rationalization & lower interest rate led to a fragile recovery. PHASE 4 (1993-1998) In this phase we can observed that in recovery stages, with the tightening of monetary policy the inflation descends gradually with the increase in GDP. Moreover, In preparation to the single EMU18, all European currency had to pegged closely to each other and this involved the setting of interest rate in Germany. Following the crisis, the economy gradually pick up speed with the construction price stabilized and export prices steady and the relative strength of Germany export.Bundesbank tighten its policy in response to high 94's wages settlement and weak European demand.the recovery was led by export trade and the weakening of D-mark in 96-97. ...read more.

& state authorities have to coordinate economic & financial measures for maintaining the value of the marks so to guarantee stable prices, full employment & healthy current account 3 the central bank of Germany.---the bank was given autonomy from the government & its policies has frequently differed from those desired by government. they not only provided finance but play an active part in industrial affairs. 4 As demonstrated in the graph 1. 5 The highest inflation rate for the past 20 years. 6 By reduction of taxes & increase in child allowances. 7 First time in the past 30 years! 8 Refered to in table 1 of the economic statistics 9 not the goal of employees-- Trade union inflicted long strikes and demanding rise in wages which lead to increase in unemployment . 10 selling its shares in VW etc. 11 a negative figure 12 increase dramatically. 13 Economic and Monetary unification on July 1 & full Political union on Oct 3 1990. 14 This can be observed in the inflation graph (look at 1989-1990) 15 The failure of the government to contain the growth in the deficit at the outset of the unification process was a key factor provoking Bundesbank to tightened monetary policy. 16 by sharply increase the interest rate.. 17 previously, german has a strong international export trade. 18 European Monetary Union----all the culmination of EMS(european monetary system), ERMexchange rate mechanism), ECU(european currency unit) etc... ?? ?? ?? ?? 1 1 ...read more.