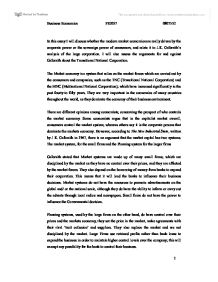 In this essay I will discuss whether the modern market economies are really driven by the corporate power or the sovereign power of consumers, and relate it to J.K. Galbraiths analysis of the large corporation. I will also assess the arguments for and

In this essay I will discuss whether the modern market economies are really driven by the corporate power or the sovereign power of consumers, and relate it to J.K. Galbraith's analysis of the large corporation. I will also assess the arguments for and against Galbraith about the Transitional National Corporation. The Market economy is a system that relies on the market forces which are carried out by the consumers and companies, such as the TNC (Transitional National Corporation) and the MNC (Multinational National Corporation); which have increased significantly in the past fourty to fifty years. They are very important in the economies of many countries throughout the world, as they dominate the economy of their business environment. There are different opinions among economists; concerning the prospect of who controls the market economy. Some economists argue that in the capitalist market overall, consumers control the market system; whereas others say it is the corporate powers that dominate the markets economy. However; according to The New Industrial State, written by J K. Galbraith in 1967, there is an argument that the market capital has two systems. The market system, for the small firms and the Planning system for the larger firms Galbraith stated that Market systems are made up of many small firms; which are disciplined by the market as they have no control over their prices, and they are affected by the market forces. ...read more.

The government only intervenes when necessary, for example, their intervention comes when mostly when the market fails. There are certain things that planning system can not plan or regulate by it self; therefore the Government will have the responsibility to complete the overall planning system. The big firms cannot control the overall size of the economy, thus, the Government regulates and aggregates demand. Also, the government provides security and manages the total spending to stabilize the economy, so that they can stop rising the entire price constantly. Large corporations cannot regulate inflation, the government does it independently somehow. Large firms cannot provide skilled workers they need, they cannot educate them, but they can provide training. So the Government provides the education that workers require, through funding colleges and universities. The Government also bails out some large corporations when they fail by giving them required funding to remain in the market. For instance, Banks who supply loans to small business. If the government does not bail out Banks, then there will be massive job losses and small business will burst since they depend on Banks in the current recession. However, if the large firms made abnormal profits, it will lead to economic growth of the Government. "Government intervention may be able to rectify various failing of the market. Government intervention in the market can be used to achieve various economics objectives which may not be best achieved by the market. ...read more.

In conclusion, I agree that the corporate powers are those who really drive the markets economy, in relation to J.K. Galbraith's analysis of the large corporations. Galbraith clearly emphasises his view on the Transitional National Corporation; which enables us to reach a conclusion, although many economists disagree with his opinions. The banks influence business decisions of small firms, whilst planning systems are in command of their costs. Some economists believe consumers drive the market economy; which I do not agree with because deep planning is required for a corporation to be able to succeed in the long-term. Big corporations have the facilities to provide global television advertisements and consumers were being persuaded to purchase goods through these means. There are certain things disadvantages in planning systems though, because they cannot provide skilled workers that they need, so the Government funds educational organisations to provide training. Nevertheless, TNC's control a quarter of production assets which is why Galbraith believed it was not the consumers but the Planning system which drove the market economy; and that shareholders do not have a great deal of control over larger firms. Other economists such as Hayek disagreed; they stated that the largest firms will fail, given that they do not rectify what customers want. I agree to this statement to an extent, but feel that the planning system and the larger firms have the foremost control, and success and failure is in their hands. ...read more.