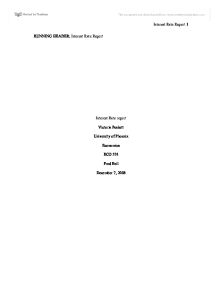 Yield Curve The yield curve or term structure of interest rates is the relationship between the cost of borrowing money and the length of time it is being borrowed. For example, Big Drive Auto may have to pay 6% interest a year to borrow money for a 10 year period of time, but only 5% interest if they borrowed the same amount for a 5 year period of time. In this case the yield curve would have points at 5 years at 5% and 10 years at 6%.Yield curves usually have and upward sloping curve as time increases so due rates, to compensate for the risks involved with longer loan periods. This must be considered as borrowing activity takes place to try and limit the time period a loan is taken from in order to minimize interest rates paid to fund expansions, and development. ...read more.

A business plan needs to allow for changes in the economic environments such as inflation, unemployment, available credit and other aspects dictated by monetary policy and the supply of money. As prices go up due to inflation from say suppliers, Big Drive Auto needs to be able to responds, and hopefully anticipate the changes in order to stabilize their operating costs. Unemployment greatly affects not just the person who is now unemployed but also all those they did business with, this changes the supply of labor and demand for products. Credit also impacts Big Drives Autos ability to sell products. If interest rates are high and or credit is hard to obtain and pay back then consumers are less likely to make discretionary purchases like a new car, however you may see and increase in car maintenance products reflective in Big Drive Autos sales. ...read more.

This student written piece of work is one of many that can be found in our University Degree Economic Systems section.