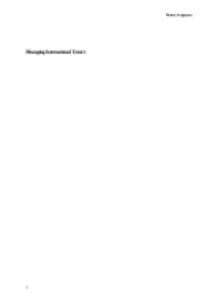 International management. This essay aims to discuss challenges, which international teams have to face.

﻿Written Assignment Managing International Team?s Table of Contents Abstract 1 Introduction 2 Terms and Explanations 2.1 International Team 2.2 Definition of Management 2.3 Culture 2.4 Cultural Differences and Cultural Diversity 2.5 International vs. Single culture Management- the Differences 3 Managing International Teams- The Discipline 3.1 Problems of an International Team 3.2 Solutions for International Teams 3.3 International Environment 4 Conclusion ________________ Abstract This essay aims to discuss challenges, which international teams have to face. Despite the fact that problems of national or single culture team are also part of the difficulties international teams have to face, it should be focused on the international context. This implies analysis of internal team problems because of team members out of different culture-areas as well as external factors, which have impacts on an international team. In further consequence strategies should be developed to resolve upcoming problems and requirements to accomplish the team?s aim should be declared. Introduction The first decade of the 21st century could be characterized by one iridescent term: ?globalization?. This term signifies the development of the world?s society as well as the rethinking in the economy. Human beings have started establishing networks and collaborations around the globe. In our daily life this is shown by the increasing use of the World Wide Web as well as social networks like Facebook, Studivz or Twitter. These technologies enable people all over the world to be connected and informed without wasting too much effort. However, we have to say that during the 90th and 20th century the world?s economy put a wrong complexion on the aforementioned globalization. Transnational corporations have outsourced parts of their business processes into low-wage countries, exploited commodities of the third world and finally benefited from child labour. Even though these facts haven?t changed, some ?global players? also use ethically correct ways to benefit from globalization. In terms of shaping the best infrastructure, companies, which source out their business process, even have started to engage local society-experts for developing business in a foreign country. ...read more.

However these differences can cause imbalances like member exclusion, subgroups and other outcomes. For that we now try to focus on the question: what are the considerable factors referring to cultural diversity, which have to be overcome so that successful teamwork is possible? In addition it should be discussed if there is a difference leading an international team in contrast to an ordinary team? As related to the first question the article ?Managing Multicultural Teams? in the Harvard Business Review can be paraphrased where it is mentioned that cultural problems inside a team are difficult to realize and moreover difficult to analyse. As a matter of fact they are often only recognized after insurmountable personal ?gaps? have already arisen. (Brett, Behfar & Mary C. Kern, p. 1, 2006) Brett, Behfar and Kern filtered out four essential ?cultural challenges?, which could occur when working in a multicultural team. Despite the fact there are plenty more, a multicultural team manager should know that explicit cultural problems could emerge because of: different communication styles, accents and fluency in speech when collaborating in a foreign language, the hierarchy style in a team, ways of solving conflicts as well as the style of making a decision. Concerning the communication style it could be said that there are two different types: the first one is talking, asking and discussing in a direct way. Especially in western countries it is widely common to give your counterpart exact and brief information what you want, how things should be done and especially how to do things differently. Non-western cultures tend to circumscribe a problem because harmony in a team is one of the most important factors for them so that they can perform well. A reason of conflict could also be the fact that articulating in a foreign language is very difficult. It often leads to problems of misunderstandings ore even not gaining the ?right status of competence? because of not finding the right words and not be able to speak fluently. ...read more.

We have found out that cultural differences trigger mistrust and a high level of self-consciousness. Out of that good team cohesion is difficult to reach and an effective working infrastructure might not be built. In the following chapter we tried to figure out ways to prevent these things to happen or develop strategies to intervene. It turned out that a team has to find coherences through values they share and work successfully through following the set up rules as well as following a firm goal. The leaders of an international team should incorporate the multicultural context of the team when making decisions and guide such a team through support and through a cooperating leading style. In our last chapter we focused on the environment in which an international team is operating. Therefore we detected that extern factors have to be taken into account when working as an international team. They have to be understood and used as an advantage for a team. To sum up this paper we want to say that an international team has many chances to outperform an ordinary team. However it has to fully overcome obstacles to be successful. List of Literature Koontz H. and Weihrich H. (2007). Essentials Of Management R. Jayaprasakash Reddy (2004). Management Process Peterson B. (2004). Cultural intelligence F.W.Taylor (1911), Scientific Management Hofielen G. & Broome J. (2000). Leading International Teams: A New Discipline Jefferson T. (1997). Great American Earley P. & Gardner H. (2005) Internal Dynamics and Cultural Intelligence in Multinational Teams - In Shapiro in D., Von Glinow, M.A., & Cheng, J.L.C. (Eds.). Managing Multinational Teams: Global Perspectives Brett J., Behfar K., and Mary C. Kern, (2006). Managing multicultural teams Keogh J. (2009). International teams: beyond cultural differences Stein S. (2009). Emotional Intelligence for Dummies Dipak Kumar Bhattacharyya (2010). Managing cross cultural teams Coade N. (1997). Managing International Business Porter M. & Kramer M. (2011). Creating Shared Value Harris, Moran & Moran (2004). Managing Cultural Differences Browaeys M. &Price R. (2008). Understanding cross- cultural management ...read more.