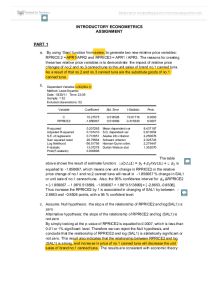 Introductory econometrics assignment. The reasons for creating these two relative price variables is to demonstrate the impact of relative price changes of no.2 and no.3 canned tuna to the unit sales of brand no.1 canned tuna. As a result of that no.2 an

This is making more sense while comparing this result with part (a). We can conclude that the increase same amount across the three brands will increase the unit sale of brand by at least 1.314%, compare to part (a) that its results can be positive and negative with a similar range. c. The ln(SAL1) as the dependent variable is a log-linear model, which shows one unit change in PR1, PR2 andPR3 are associated with a percentage change in unit sale of brand one(SAL1 ). This is more preferable in showing the price elasticity of a product and effectively showing the trend of unit sales change. One the other side, the model with SAL1 as the dependent variable is a linear-linear model, which indicates the relationship between one unit changes of PR1, PR2 andPR3 together will result in unit change in SAL1. Summary: According to the results above, we can conclude that there is a positive relationship between the sales on brand no.1 canned tuna and the price of the other two brands canned tuna, also a reverse relationship for the price and unit sales of no.1 canned tuna. If Alpha Supermarket stock all three brands canned tuna with expect sales when no.1 =90, no.2 =75 and no.3= 75, one dollar increase in price for all three brands will be 95% sure that the unit sales for no.1 canned tuna will be increased by 1.3% to 13.7%. ?? ?? ?? ?? ...read more.

The author has produced excellent regression models and clearly understands what he/she is doing, with good econometric understanding. However, explanations and definitions of variables could make it clearer.