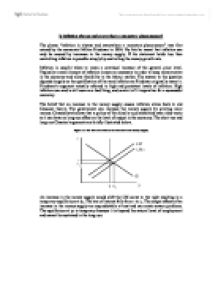 Is inflation always and everywhere a monetary phenomenon?

Is inflation always and everywhere a monetary phenomenon? The phrase "inflation is always and everywhere a monetary phenomenon" was first coined by the economist Milton Friedman in 1956. By this he meant that inflation can only be caused by increases in the money supply. If his statement holds true then controlling inflation is possible simply by controlling the money growth rate. Inflation is usually taken to mean a continual increase of the general price level. Typically a small amount of inflation is seen as necessary in order to keep money active in the economy and allow flexibility in the labour market. The answer to the question depends largely on the qualification of the word inflation as Friedman originally meant it. Friedman's argument actually referred to high and persistent levels of inflation. High inflation was and is still seen as a bad thing, and control of it imperative for a successful economy. The belief that an increase in the money supply causes inflation stems back to old Classical theory. The government can increase the money supply by printing more money. Classicalists believe that a policy of this kind is a pointless and even risky tactic as it can have no long-run effect on the level of output in the economy. ...read more.

They did not identify such a strong correlation for those countries with less than 20% inflation. However, even in these countries the relationship was still positive.2 Figure 1.3 The results obtained by De Graauwe and Polan confirm the work of Vogel (1974), Dwyer and Hafer (1988, 1999), Barro (1990), Pakko (1994), Poole (1994), and McCandless and Weber (1995). All of their work establishes a strong positive correlation between money growth and inflation using various measures of money.3 So, we can safely assume that a high rate of money growth is almost always accompanied by a high level of inflation. This does not in itself prove that inflation is always and everywhere a monetary phenomenon. It could be that the high levels of inflation are triggering the increase in the money supply. Increased prices mean that people demand more money and therefore money must be printed. This is the argument of Fischer et al. whose findings reveal that "more often than not, causation runs from exchange rate changes and inflation to money growth".4 Graham Dawson agrees saying that "no correlation between money and prices, however strong, is sufficient to establish a causal effect flowing from money to prices".5 However Fischer et al. ...read more.

It is generally accepted that control of the money supply will provide control of inflation. Therefore we can conclude that a high and persistent level of inflation is always and everywhere a monetary phenomenon. That is V and Y have only a small effect in the equation. Whilst the effect of an increase in the money supply may not have a directly proportional effect on prices, any increase in the money supply will have some effect on prices. Seeing as the link between the money supply and inflation is so clear, it seems strange that any government would choose to continue printing money. One explanation, particularly in less developed countries, may be that if an economy is not growing then people get upset which may result in anarchy. If people are getting better off then there is less industrial unrest. If you are not getting better off then you will be miserable, things can be made 'better' by allowing the money supply to increase. This, though, is not sustainable as only real things can be given to people, otherwise there will be hyperinflation. Moderate control or monitoring of the money supply must always be a policy for any government that wishes to be successful. ...read more.