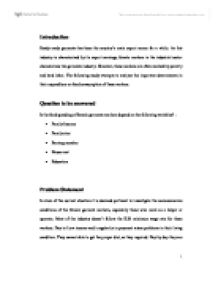 Is the food spending of female garments workers depend on the following variables? : Family Income, Family size, Earning member, House rent, and Education.

Introduction Ready made garments has been the country's main export earner for a while. As this industry is characterized by its export earnings, female workers in the industrial sector characterizes the garments industry. However, these workers are often marked by poverty and hard labor. The following study attempts to analyze the important determinants in their expenditure on food consumption of these workers. Question to be answered Is the food spending of female garments workers depend on the following variables? : * Family Income * Family size * Earning member * House rent * Education Problem Statement In view of the current situation it is deemed pertinent to investigate the socioeconomic conditions of the female garment workers, especially those who work as a helper or operator. Most of the industry doesn't follow the ILO minimum wage rate for these workers. Due to Low income and irregularity in payment raises problems in their living condition. They cannot able to get the proper diet, as they required. Day by day they are loosing their efficiency which is reducing their productivity. When the productivity goes down the GDP also affected. Objectives: The research intends to look into the per month food Expenditure by the Bangladeshi female garment worker, With particular emphasis on ...read more.

to the garments female workers. Successful completion of the survey crucially depended on the cooperation of the owners of the garment industries. We made appointment with the managing director who could be conducted after several phone calls and some times after 5 p.m. only or on Friday. In some industries it took lot of persuasion to convince them. Methods: The data has been conducted by directly questioning the female worker randomly at the lunch lime. This also helped us to eliminate possible bias that could have been there, if they were questioned on the production floor. As the interview was conducted within the factory premises and adequate care was taken to ensure the interview was confidential and none of the management personal was around during the interview. Problem Area In the initial collection of data we included a variable i.e. family member. But, in this variable we only included members who are living in Dhaka. But, later we felt that we should actually include members in the workers' village. But, we could not arrange any other appointment so we had to stick with the earlier data. By not including the village members we are actually overlooking a very important variable so our regression results could have a very high residual, in other way the R2 might be small. ...read more.