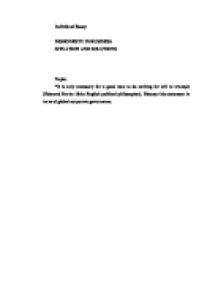 It is only necessary for a good man to do nothing for evil to triumph [Edmund Burke 18thc English political philosopher]. Discuss this statement in term of global corporate governance.

Individual Essay: DISHONESTY IN BUSINESS SITUATION AND SOLUTIONS Topic: "It is only necessary for a good man to do nothing for evil to triumph [Edmund Burke 18thc English political philosopher]. Discuss this statement in term of global corporate governance. This assignment will discuss about meanings of Edmund Burke's quotation in terms of global corporate governance. Through that, writer aims to examine the actual dishonesties in business and its consequences. Moreover, it is going to point out manager's responsibilities and suggest some solutions to prevent dishonesty in business. Nowadays, because of important roles for economic health of corporations and society, corporate governance attracts more and more public interest. It is defined as a system that helps to control the balance between economic and social goals in general, individual and communal goals in particular. Furthermore, by implementing suitable corporate governance, company could use efficiently resources and enhance its accountability and transparency. Its objective is to harmonize the interests of individuals, corporations and society. (Adrian Cadbury, 2002) However, recent financial crises, such as HIH Insurance and One-Tel collapse in Australia, and the failure of a series of major corporations in the United States has revealed severe shortcomings in corporate governance. Many other scandals involving falsification of information demonstrate the emergency of dishonesty in workplace. Unethical business is not only harmful for the company's wealth but also for the society at large. We have to try harder to stop business dishonesty and make efforts to reform and overcome weaknesses in corporate governance. ...read more.

He founded Bernard L. Madoff Investment Securities in 1960. After 20 years of development, his firm was one of the largest independent trading operations in the securities industry. The company had around USD 300 million in assets in 2000 and ranked among the top trading and securities firms in the United States. It operated more than two dozen funds overseeing USD 17 billion (Ruby Washington, NY Times). To attract potential investors to his company, Madoff promised to pay them an extraordinarily high return even in the economic recession time. But on Dec. 11, 2008, Madoff B.L. was arrested by federal agents and charged in what could be the largest fraud in Wall Street history-a Ponzi scheme (also called pyramid scheme) that costs over 20 years was put at USD 65 billion. The list of investors who were victims of this "century fraud" was growing, including some of the world's biggest banking institutions and hedge funds, the super rich and the famous, pensioners and charities. When the truth was revealed, he admitted his guilt : "I'm responsible for a great deal of suffering and pain, I understand that". Madoff began his Ponzi scheme in 1991. He paid returns to separate investors from their own money or money paid by subsequent investors, rather than from any actual profit earned. Meanwhile, he strengthened investors and authorities confidence by sending them fake financial statement. He admitted he had never made any legitimate investments with his clients' money during this time; instead, he deposited the money into his business account at Chase Manhattan Bank, then purchased properties and services for his personal use and benefit of himself, his family members and his associates. ...read more.