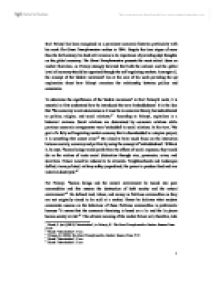 Karl Polanyi has been recognised as a prominent economic historian particularly with his work The Great Transformation written in 1944. Despite the time elapse of more

Karl Polanyi has been recognised as a prominent economic historian particularly with his work The Great Transformation written in 1944. Despite the time elapse of more than the half-century, his book still remains in its importance of providing dept thoughts on the global economy. The Great Transformation presents the most critical ideas on market liberalism, as Polanyi strongly believed that both the national and the global level of economy should be organised through the self-regulating markets. Amongst all, the concept of the 'double movement' lies at the core of his work providing the apt explanation about how Polanyi examines the relationship between politics and economics. To determine the significance of the 'double movement' in Karl Polanyi's work, it is essential to first understand how he introduced the term 'embeddedness'. It is the idea that "the economy is not autonomous as it must be in economic theory, but subordinated to politics, religion, and social relations."1 According to Polanyi, capitalism is a historical variance. Social relations are determined by economic relations while previous economic arrangements were 'embedded' in social relations. ...read more.

He argues that disembedding the economy from society or politics is impossible by saying that "real market societies need the state to play an active role in managing markets, and that role requires political decision making; it cannot be reduced to some kind of technical or administrative function."6 For Polanyi, in particular, economic liberals can be defined as those who worship the system of the pure market economy, but economic liberals are not simply pro-market; "They have a simple utopian vision that has no place for any organising principle other than competitive markets. Market society is the outcome of an economic machine that they liken to clockwork."7 While Polanyi himself was not being an economic liberal, he believed that markets have such legitimate influence within societies. He also argues that humans are not motivated by material gain, but primarily by a quest for social standing. That is the reason why he thinks markets are a peripheral feature of a normal society.8 Especially, where wealth determines social status, the pursuit of material gain takes place. ...read more.

Vital thought such a countermovement was for the protection society, in the lat analysis it was incompatible with the self-regulation of the market, and thus with the market system itself."12 In other words, it clearly shows that Polanyi has a consistent desire to reconnect the economic relationships into social and political situations by using the concept of the 'double movement'. Polanyi's writing is indeed an attractive piece of work that gains more attention in the 1990s than in earlier period. Even thought it is not easy to classify into certain categories, his work is best known both as conservative and socialist at the same time. In general, it is about the dichotomy of modern industrial capitalism: the clash between the politically imposed machinery of the 'self-regulating market economy' and the impulsive forces of 'national and social protection'.13 Polanyi's central insight is that governments have been in such a practical position for both initiating and seeking to maintain the pure market system. Moreover, his work is subsequently significant, particularly in terms of providing historical account with the fact that his work is very contemporary. ...read more.