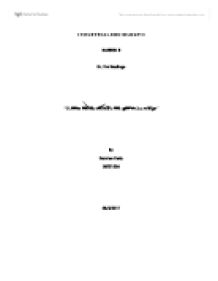 Key strand of thought in Sociology. In this assignment I intend to examine in detail some of the main strands of thought associated with industrial sociology. To avoid the notion of schools of thought within sociology the term strand has been coined

I N D U S T R I A L S O C I O L O G Y II BAHHRD II Dr. Tim Hastings "Outline the key strands of thought in Sociology" By Damien Kelly 08751536 28/3/2011 In this assignment I intend to examine in detail some of the main strands of thought associated with industrial sociology. To avoid the notion of schools of thought within sociology the term 'strand' has been coined which allows to bring together the different contributions with whom a pattern has appeared and have something in common (Watson, 2003, p. 21) In exploring this topic in further detail one can see that there are six main strands. These include the managerial-psychologistic strand in which Watson points out is a strand in which contains what are usually seen as quite separate and indeed contrasting styles of thought (Watson, 2003 p. 21) Other stands include work by influential and renowned figures of sociology who include Durkheim in the Durkheim-systems strand, Marx in the Marxian strand and Weber in the Weber-social action strand. Lastly the sixth strand which will be examined within the assignment is that of the postmodernist perspective and poststructuralist. The first strand that will be explored is the managerial-psychologistic strand. This strand can be broken down into two key developments in this strand which are Scientific management and Psychological humanism. In looking at this one could argue that this strand does not strictly cover the work of sociology at work but rather it looks at the human side and is one in which sociologists look to and indeed critique to provide alternatives. ...read more.

Corporate culture is the idea that senior managers within an organisation must strive to develop a sense of belonging and purpose within the organisation. Barnard (1938) contrasted this on Durkheim's anomie. Watson (2008 p. 46) in relation to corporate culture, suggests that a key weakness with Durkheim's work is that it has a tendency to over-emphasise integration and consensus both within societies and within work organisations at the expense of attention to underlying conflicts. Ethnomethodology studies how people make sense of their world and argue that there are no structures to which it can relate which contradicts traditional sociology. Watson (2008, p. 52) suggests that the dangers of turning conceptual abstractions like 'society', 'class' or 'organisation' into existing 'things' which have a life of their own outside peoples own minds. The next strand which will be examined is that of the Weber-interpretivist strand. Essentially what this strand deals with is both the meaningful activity of the individual and the large scale questions of historical change and economic and political conflicts (Watson, 2008 p. 53). Weber attempted to find a balance between considerations of processes at a historical/societal level and processes of interpretation and action at the individual level (Hastings, 2011). Some critiques of his work would include the fact that some of his works are unfinished, ambiguous and the spelling and grammar is poor. Weber's early work inspired Goldthorpe to produce the Affluent Workers studies which gave rise to the concept of orientations of work. ...read more.

Postmodernism flies in the face of the world being a social order in which we as humans attempt to build a system to make sense of and to extract our economic, actualisation and humanistic needs. Instead we, as humans, can go about inventing our own world through our own language and culture. Poststructuralist denies the existence of structures. We can no longer rely on religion or science to make sense of the world and its realities are situated within the text and language which are not predefined. Indeed, it can be argued that it is the person who will give them meaning. Watson (2008, p.67) describes discourses within this strand as a set of concepts, statements, terms and expressions which constitute ways of talking or writing about a particular aspects of life, thus framing the way people understand and act with respect to this areas of existence. Essentially poststructuralism has been a dominant factor in tying together the idea of multiple discourses to the centre of the sociology of work and organisations. In conclusion one can see through the different strands how the sociologists have grounded the work in the area of sociology and that there are many that have links to another which have been examined throughout the course of this paper. One can also see the different views Durkheim and Marx displayed as completely opposite each other. Essentially, these strands form the basis for further exploration into sociology and provide the sound base for which to continue. ...read more.