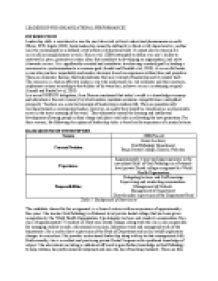 ﻿LEADERSHIP FOR ORGANISATIONAL PERFORMANCES INTRODUCTION Leadership skills is considered as one the most observed yet least understood phenomenon on earth (Burns 1978, Jogulu 2010). Good leadership cannot be defined by a fixed set of characteristics; neither can it be summarized by a defined set of actions or behavioral traits. It cannot also be measure by successful accomplishments or tasks. House et al. (2004) attempted to define it as one?s ability to motivate his peers, generate eccentric ideas that contribute to developing an organization, and move it towards success. It is significantly essential and contributes to achieving a mutual goal by leading a movement in synchronization to a common goal (Arnold and Randall et al, 2010). A successful leader is one who practices impartiality and renders decisions based on experience without bias and prejudice. There are numerous theories that help elaborate the basic concept of leadership and its related traits. The consensus is; that an effective leader is one who understands his sub-ordinates and their reactions, implements actions according to the abilities of his team thus, achieves success in attaining set goals. (Arnold and Randall et al, 2010) In a recent UNESCO delegation, Arne Duncan mentioned that today?s world is a knowledge economy and education is the new currency by which nations maintain economic competitiveness and global prosperity. Teachers are a relevant example of leadership in modern life. ...read more.

In lieu with the above mentioned criteria, the traits of the interviewee is described in the following table; Personality Characteristics Behaviors Effects on Followers Dominant Role model Trust Dedicated Competency Acceptance Confident Goals Obedience Strong moral value Communication Increase achievement of goals House, R.J. (1976). A 1976 theory of charismatic leadership. In J.G Hunt & L.L Larson (Eds), Leadership: The cutting edge (pp 189-207). Carbonale: Southern Illinois University Press Having graduated from the same institution, the interviewee possesses sufficient knowledge about the educational system and the subject. She understands the communication networks and can adequately convey and delegate orders. She appears to be a confident and dominant personality, which the students look up to as a role model. This gives her the element of trust and acceptance followed by obedience. She works in joint collaboration with other staff and subordinates to achieve set goals, resolve conflicts and solve problems. Overall, this makes her a competent leader who is capable of achieving set goals and brings out the full potential of the students successfully. STRATEGIC LEADERSHIP Upon completion of the interview, it was concluded that the interviewee used both transactional and transformational styles of leadership to get the desired results from her class. She makes it a point to engage her students in a particular task in such a manner so as to invoke their full potential. ...read more.

The evident improvement of grades clearly depicted that this style of leadership was successful, thus, this was acknowledged by the Principal of the dental college and the Oral Pathology department was given a reward for improving the overall standard of education. Discussion The interviewee is not only a resource provider but, can be visualized as a mentor and supporter. Her personal relationship with students resulted in improved performance from the class. She not only opted for transactional but also used her charismatic personality to invoke a transformational style of leadership. This was readily accepted by Head of Department. This sense of autonomy directly enhanced productivity and teaching capabilities. The school leadership system is mostly a top-down hierarchal structure, however, in this case the collaboration between the Head of department and interviewee lead to evidence based improvement. Thereby, we can conclude that using both transactional and transformational styles of leadership are beneficial. It improves the communication between leader and sub ordinates, improves goal setting and performance along with response and conflict resolution. Resulting in overall improved performance. It is mentioned by Judge and Piccolo (2004), that most transactional and transformational leadership behavior are effective and relatively valid. They also emphasized that transformational leadership builds better reinforced relationships with criteria that reflects follower satisfaction and motivation than objective performance in transactional leadership. It can be said that transformational leadership yields better outcomes but in this case, both styles overlap each other therefore there is no conclusion on distinctive effects of each style. ...read more.