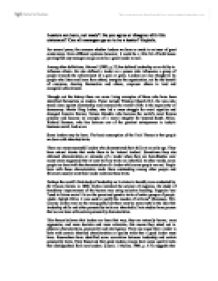 &quot;Learders are born, not made&quot;, do you agree or disagree with this statement. Explain.

Leaders are born, not made". Do you agree or disagree with this statement? Can all managers go on to be a leader? Explain. For several years, the concern whether leaders are born or made is an issue of great controversy. From different opinions however, it could be a little bit of both hence proving that any manager can go on to be a great leader as well. Among other definitions, Maxwell (1993, p.11) has defined leadership as an ability to influence others. He also defined a leader as a person who influences a group of people towards the achievement of a goal or goals. Leaders are also thought to be people who listen and learn from others, energize the organization, act for the benefit of everyone, develop themselves and others, empower others to lead and recognize achievement. Through out the history there are some living examples of those who have been identified themselves as leaders. Those include Winston Church Hill, the man who stood alone against dictatorship and renewed the world's faith in the superiority of democracy. Martin King Luther, who led a mass struggle for racial equality and changed America forever, Nelson Mandela who became the world's most famous prisoner and became an example of a moral integrity far beyond South Africa. Richard Branson, who has became one of the greatest entrepreneur in today's business world. And so on. Some leaders may be born. The basic assumption of the Trait Theory is that people are born with inherited traits. There are many successful leaders who demonstrated their skills at an early age. They have natural talents that make them to be 'natural leaders'. Sometimes they also obtained characteristics or elements of a leader when they are born.Studies over recent years supported that at least half our traits are inherited. In other words, some people are born with the characteristics of a leader while some people are not. ...read more.

Gates has also is identified to own the world's largest charitable foundations. Throughout his life therefore, Gates proves that leaders can be self made. He was described as workaholic, who worked very hard during his education ate Harvard University and was very ambitious since childhood. He could perform any task on which he applied his mind. At the age of fifteen, he had a mission to become a millionaire at the age of thirty. He always learnt from his past mistakes. Through the evidences, Daniel (1998, p. 110) argues that self-awareness can be a significant source that leads one to leadership. This is the ability to read your own emotions and how you affect others, having a strong sense of who you are, your emotions, strengths, weaknesses, needs and drives. For example, one might recognize that deadlines make him tense and frustrated, so he plans well in order to avoid getting too close to deadlines before finishing a project. Self-regulation is the process of controlling one's emotional impulses. Motivation is the drive to achieve beyond expectations. Empathy involves considering peoples' feelings when making decisions. For example, Martha Stewart's life passion for stylish entertaining and living transformed her from the head of a catering business to an amazing entrepreneur. Her media and entertainment company, Martha Stewart Living Omni media Inc., made $11.7 million in net profits in 1999 on revenues of $232 million. She is the editor of Martha Stewart Living magazine with a circulation of 2.3 million. She appears on an hour-long syndicated TV The Early Show seen by 1.6 million people daily, and she is a regular on CBS's and a frequent guest on The Late Show with David Letterman. The Stewart's can-do-anything-and-everything attitude demonstrates her passion and precision in action. Social skills are of importance, hence developing attitude that finds something in common with everyone (Kinsley, 1996, p.115). Emotionally intelligent leaders work well with other people and are effective in leading change (Yukl, 1994, p.70).A key theory to emerge about leadership is ...read more.

personality characteristics, which make them more effective as leaders, or in exhibiting leadership qualities. There are certain factors that are indisputably innate, such as family, genetics etc, however there are factors that are controversial such as intelligence, personality and status. These factors are arguably influenced by environmental and situational factors. In comparison, there are influential factors that are not innate, i.e., social influences, life-experiences, education, mentors etc. it appears that there is a genetic component to leadership, but leadership qualities can be learned, as well. For example, one person might be born with more intelligence or dominance than another, but a person can train himself or herself to learn these qualities. Certainly, some qualities of a good leader that have been identified by many theorists and consultants are not innate, but rather must be learned. Integrity is one of these. Human beings are not born with an innate sense of honesty; observing young children tells us as much. Consider a child of three or four who breaks a dish. His reaction is not to immediately report what he has done, but to hide the evidence and claim later that he had nothing to do with the dish being broken. We must learn as we grow and develop what integrity is. It is the same for a number of other leadership traits that can be learned. Judging by my research, the trait theory and situational theory of leadership are perhaps the most appropriate. There definitely are specific traits that a leader must have; many of these have already been identified. Those traits, however, differ depending upon the situation and the people who are being led. If leadership has been won by strength of personality alone, then should a lack of ability be exposed, future decisions may be opposed or obstructed, as followers will question their judgement and also their leadership. Conversely, leadership based solely upon technique will suffer if the leader's personality causes friction within the organisation. In this instance decisions may be opposed for political reasons and inefficiency may arise due to low morale. ...read more.