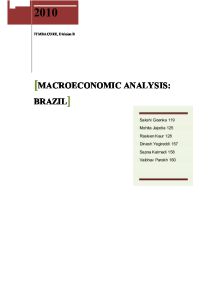 Macroeconomic analysis of Brazil. In the following sections, we give a brief overview of the economys past and then present a detailed analysis of its current macroeconomic policies and the challenges faced.

2010 FTMBA CORE, Division B [MACROECONOMIC ANALYSIS: BRAZIL] INDEX Introduction 3 1. Analysis of the past 4 1.1 The "Lost Decade" of the 80's and 90's 4 1.2 The Real Plan and the East Asian Currency Crisis: 1994- 1998 6 2. Current Macroeconomic Environment: Brazil under Lula 7 2.1 Lula's first administrative term: 2003 - 2006 7 2.2 Lula's second administrative term: 2007 - 2010 11 3. Challenges faced and Policy recommendations 15 Conclusion 16 References 17 Appendix 18 INTRODUCTION The economy of Brazil is the world's eighth largest by nominal GDP and ninth largest by purchasing power parity. It is one of the fastest-growing economies in the world with an average annual GDP growth rate of over 5 percent. Characterized by large and well-developed agricultural, mining, manufacturing, and service sectors, Brazil's economy surpasses all other South American countries. In 2001, Goldman Sachs chief economist coined the term BRIC, a concept, which states that Brazil, Russia, India, and China could become the four most dominant economies by 2050. Macro Economic Indicators In order to give an overview of the Brazilian economy, below is some macroeconomic data depicting its development. The GDP of Brazil in terms of PPP was 2.013 trillion dollars in 2009. After the high rates of inflation experienced in the 80's and the 90's, the rates have been relatively low in the last ten years. The consumer price inflation rate in 2009 was 4.2%. Next, we look at the unemployment levels, which have been steadily decreasing from 2004 and are at their lowest levels now at 8.1% in 2009. A majority of 68.5% of the GDP is composed of Services with financial services accounting for as much as 16%. Brazil has the second biggest industrial sector in the Americas. Accounting for 25.5 % of GDP, Brazil's diverse industries range from automobiles, steel and petrochemicals to computers, aircraft, and consumer durables. Although the Agriculture accounts for only 6% of the GDP yet Brazil excels in several areas such as they have the largest cattle herd in the world. ...read more.

The reason for the large interest rate spreads was the legal difficulties faced by lenders in enforcing their rights over borrowers in default. In early 2003, the new government was initially obliged to maintain base rates above 15%. Consequently, GDP rose by only half a percentage point in 2003, the worst growth performance since 1992. With its orthodox credentials established, the government then lowered interest rates by around four percentage points, leading to growth acceleration in 2004. Unfortunately, due to the emergence of price pressures, monetary policy had to be retightened and thus the economic activity slowed notably in 2005. Thus, the biggest drawback of tight monetary policy was that high interest rates resulted in low private investment leading to decline in productive capacity in several sectors. Fiscal austerity: The government was committed to the pursuit of tough fiscal targets as mandated by the IMF. In 2003, the primary surplus target was raised from 3.75% to 4.25% and finally to 5.16% of GDP in 2005. The strengthening of the public finances was because of two factors. First, the government rigorously contained non-debt related expenditures especially in the field of public investment. Second, it resisted the temptation to stimulate activity through tax cuts. Trend in fiscal deficits for the period 2002-2006: (Source: www.focuseconomics.com) Exchange Rate: The performance of the external account was one the most notable developments in this period. The trade balance showed a surplus because of acceleration in demand for Brazil's natural based products especially staples like metallic ores, soya and steel. The high interest rates also resulted in huge capital inflow, thus appreciating the Real. Because of the current and capital account surplus, Brazil was able to accumulate foreign exchange reserves, which it had run down during the 1997-1998 crises. Trend in exchange rate during the period 2002-2006: Thus, even though the government was able to achieve relatively low inflation rates, reduction in fiscal deficits and a strong performance of the external sector; high growth continued to remain elusive due to the orthodox monetary and fiscal policies. ...read more.

> Brazil has the highest tax burden among the BRIC nations roughly amounting to 34% of the GDP. Moreover, the tax rates are cumulative and there are multiple tax agencies, tax rates and bases for calculation. The high cost of complying with tax obligations is an incentive to fraud and tax evasion, whilst tax complexities hamper investment. Tax policies are one of the major reasons why many companies run their activities as informal business. According to a World Bank report, approximately 40% of business in Brazil is informal. Thus, a major reform of tax policies is needed for long-term sustainable growth. > Quality of education is still poor. Even though the country now has a national educational assessment, the government does not seem to have a clear action plan to improve education. The quality of education has to increase to improve effectiveness and efficiency of the workforce. > In Brazil the freedom to start, operate, and close a business is limited by national regulatory environment. To start a business in Brazil it takes three times the world's average of 43 days and more than 234 days to obtain a business license. Sweeping reforms are therefore required to improve the long, complicated, and costly processes of contract enforcement and business registration. Brazil does not provide an environment for entrepreneurs to easily open and sustain business, leading to a big opportunity cost for economic growth. Conclusion The neoliberal policies of the Lula government have provided macroeconomic stability to the economy. The selection of Brazil to host the 2016 Summer Olympics is proof positive that Brazil has "made it". However, there are many structural reforms, such as those mentioned above, that need to be carried out, if Brazil wants to sustain its growth. What now remains to be seen is how the newly elected administration set to take office in January 2011 will address these issues. REFERENCES Books: > "Macroeconomic crises, policies, and growth in Brazil, 1964-90", Donald V. Coes > "The Brazilian Economy: Growth and Development", Werner Baer. ...read more.