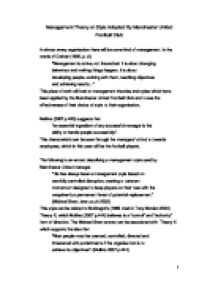 Management Theory or Style Adopted By Manchester United Football Club In almost every organisation there will be some kind of management. In the words of Crainer (1998, p. xi) "Management is active, not theoretical. It is about changing behaviour and making things happen. It is about developing people, working with them, reaching objectives and achieving results..." This piece of work will look at management theories and styles which have been applied by the Manchester United Football Club and to see the effectiveness of their choice of style to their organisation. Mullins (2007 p.453) suggests that "an essential ingredient of any successful manager is the ability to handle people successfully". This characteristic can be seen through the managers' attitude towards employees, which in this case will be the football players. The following is an extract describing a management style used by Manchester United manager. "His has always been a management style based on carefully controlled disruption, creating a constant momentum designed to keep players on their toes with the unspoken but permanent threat of potential replacement." (Michael Grant, bnet.co.uk 2003) This style can be related to McGregor's (1960 cited in Tony Morden 2004) Theory X, which Mullins (2007 p.444) believes is a "control" and "authority" form of direction. ...read more.

(Gwyther & Saunders 2005) From this we can see how the Manager motivates his players even though the team lost whereby they didn't get the result that the organisation desired. This touches upon characteristics which form McGregor's (1960 cited in Mullins 2007 p.444) Theory Y which states 'Motivation occurs at the affiliation, esteem and self-actualisation levels'. We can see that the manager is engaging their self-actualisation levels by telling them how good they are, making them feel as a unit by using words such as "we" which will make feel affiliated with the club and we can also see that he is motivating them to be "positive" and having "dignity" this can help the employees with their esteem levels. This can be analysed further if we refer back to Blake and Mouton's (1985 cited in Mullins 2007 p.448) managerial grid, it would seem that there is a high concern for people and a low concern for results which could be interpreted as a 'country club' style of management. However this can be seen to support the earlier statement that actual management style adopted is influenced by the demands of the given situation, which can be clearly observed by studying the statements by the Manchester United manager. ...read more.

Manchester United management achieves this through their "people management" skills applied through motivation, loyalty, teamwork and leading edge training methods. Mullins (2007 p.462) suggests that effectiveness can be measured through indicators. Elements that can be measured could include the motivation and morale of the employees', success of their training and development, and the creation of an environment in which the staff works effectively. Indicators of these measures could involve productivity (direct indicator of productivity would be league tables), adherence to quality standards and accuracy of work (Mullins 2007 p.462). The following quote by Steve McLaren (former England football manager) reveals the methods that the manager at Manchester United uses to be effective. "...he treats people with the utmost respect ... He has tremendous influence over the way the players play, behave and train ... Anybody who comes in immediately knows what the standards are." (Townsend 1999.) Using Reddins' (1970 cited in Mullins 2007 p.467) 3D model we can associate the management at Manchester United with the 'executive management' style which has high concern for task and relationship and sets high standards and favours 'team management'(Blake and Mouton op. cit.). Reddins' executive management style is the most effective in his 3D model (Figure 2) (Reddins 1970 Cited in cited in Mullins 2007 p.466) therefore we can conclude that Manchester United is an effective organisation. ...read more.