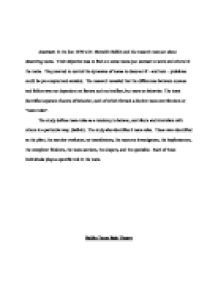 Individuals may be empowered during this phase to take small decisions. Success depends on a conscious effort form the team members. Performing occurs when the team actually starts to work towards achieving the laid down objectives. The study found that teams that resolved the first two stages successfully, tended to function as a unit to get tasks done effectively, without conflict or external supervision. It also showed that success depended on the interpersonal structure that allows flexible roles for team members. In this stage the project manager acts as a facilitator delegating tasks and overseeing their implementation (tuckman). In the adjourning stage of Tuckmans theory, project members celebrate the accomplishment of the project goals and the team disassembles. During this stage the project manager needs to improve project team motivation. This is usually due to the team members feelings of uncertainty about their future. At this stage the project manager can either introduce a new product with necessary team changes, or simply proceed to disband the team (tuckman). Motivational Theory in Project Management Josh Nankivel's theory on motivation refers to the hygiene / motivator theory. Satisfaction and dissatisfaction . According to Nankivel, job satisfaction does not result in motivation, and the two are not opposites of each other, but are separate issues which need to be investigated separately. ...read more.

They support people who are working on common tasks or in the same professional field and who can benefit from sharing experience. According to Kimball, management must have a new mind set in order to be effective in contemporary organizations. Managers must move from a face to face environment for interaction to different kinds of environment to support high quality interaction. Managers are shifting from collaboration when teams interact at a fixed time and place to ongoing and boundary-less collaboration (Kimball). Conclusion Managing project teams has plenty of theories, from motivational theories to types of teams to be managed. All have the same basic concepts which enable them to be successful. Most theories point to some type of motivation for teams to be successful. There are numerous theories on motivation, from Mcgregor's theory X and theory Y to Herzbergs KITA motivation theory. Tuckmans theory outlines 5 different stages for the development of project teams. These theories are distinct and merge to some extent into virtual teams. Meredith Belbin, How to Belbin Team RolesRetrieved from, http://www.belbin.com/rte.asp?id=8 19 Jun 2011 N Nayab, Tuckman's Theory of Team Development for Project Teams, Retrieved from; http://www.brighthub.com/office/project-management/articles/103182.aspx 19 Jun 2011 Tonya Peterson, Motivation: How to Increase Project Team Performance, Retrieved 19 Jun 2011 from;http://userhome.brooklyn.cuny.edu/irudowsky/PM/articles/Motivation-IncreaseProjectTeamPerformance.pdf Ron Holohan, Motivational Theory in Project Management, Retrieved 19 Jun 2011 from, http://pm411.org/2008/06/23/motivational-theory-in-project-management/ Lisa Kimball, Managing Virtual Teams, 1997 retrieved from; http://www.groupjazz.com/pdf/vteams-toronto.pdf ...read more.