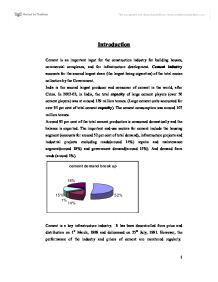 Introduction Cement is an important input for the construction industry for building houses, commercial complexes, and for infrastructure development. Cement industry accounts for the second largest share (the largest being cigarettes) of the total excise collection by the Government. India is the second largest producer and consumer of cement in the world, after China. In 2002-03, in India, the total capacity of large cement players (over 50 cement players) was at around 139 million tonnes. (Large cement units accounted for over 95 per cent of total cement capacity). The cement consumption was around 107 million tonnes. Around 95 per cent of the total cement production is consumed domestically and the balance is exported. The important end-use sectors for cement include the housing segment (accounts for around 52 per cent of total demand), infrastructure projects and industrial projects excluding roads(around 14%) repairs and maintenance segment(around 18%) and government demand(around 15%). And demand from roads (around 1%). Cement is a key infrastructure industry. It has been decontrolled from price and distribution on 1st March, 1989 and delicensed on 25th July, 1991. However, the performance of the industry and prices of cement are monitored regularly. Cement sector has been a beneficiary of Government's increased focus on infrastructure and housing. Cement has been witnessing a strong growth in the last two years, due to a combination of the National Highway Development Project (NHDP) and the housing boom (driven by a low interest rate regime). The Government's infrastructure related initiatives (announced during the 2001-02 to 2003-04 period) will continue to boost cement demand.Over the next 5-6 years, the NHDP and the new project (road component alone) are expected to account for 4-5 million tonnes of cement demand every year. This could result in double-digit growth in the cement sector over the next five years. Capacity and Production The cement industry comprises of 125 large cement plants with an installed capacity of 148.28 million tonnes and more than 300 mini cement plants with an estimated capacity of 11.10 million tonnes per annum. ...read more.

Dispatches for the month of March 04 were at 1.24 million tonnes as against 1.31 million tonnes for the corresponding period last year. The Production and Dispatches of Ambuja Group for the month of May 2004 are 1.23 and 1.23mn tones respectively as against 1.21 and 1.23mn tones in 2003. while production and dispatches for July-May04 are 12.27 and 12.26mn tones respectively as against 11.59 and 11.59mn tones in 2003.GACL is proposing to expand its marketing base, setting up a bulk cement sea terminal at Tuticorin in Tamilnadu. The project has been stalled till further notice from the courts. Grasim Company Profile Grasim Industries Ltd (GIL), the flagship of the Aditya Birla group (AV Birla group), was set up in 1947. The group is well diversified with major interests in viscose staple fibre (VSF), cement. Other businesses of the group includes textiles and sponge iron. Grasim is the third largest producer of grey cement in India (installed capacity of 11.33 million mtpa) and is also South Asia`s largest producer of white cement (installed capacity of 0.36 million mtpa). Grasim`s main interest is in L&T`s cement business as the later is the second largest cement producer (with a capacity of 16 mt) in the country after ACC. Grasim is poised to become the world's seventh largest cement producer, and the largest in a single location Plant Location Capacity (in million tonnes) Rajashree Cement Malkhed and Hotgi grinding unit 4.00 Vikram Cement Jawad and Bhatinda grinding unit 4.20 Grasim Cement Raipur 2.06 Aditya Cement Shambhupura 1.50 Cement Division South Reddipalayam 1.16 Total 12.92 Shree Digvijay Cement Sikka, Gujarat 1.08 Total (incl subsidiary) 14.00 Capacities Division Capacity Grey cement Grasim Industries 12.92 million TPA Shree Digvijay Cement 1.08 million TPA Total Total 14.00 million TPA White cement 400,000 TPA Cement business statistics Production and dispatches 2003-04(ton) 2003-02(ton) %change Production 1,04,30,340 68,21,340 52.9 Dispatches 1,04,57,180 47,80,570 118.7 Balance Sheet As on 31-Mar-03 31-Mar-02 Assets Rs cr Rs cr Gross Block 5479.85 5268.37 Net Block 3174.80 3160.31 Capital WIP ...read more.

The higher the EPS the better it is for the company and the investors. Looking at the PE ratio we can say that shree cements has the highest value which indicates it is a growth company but it also indicates the risk characteristics of a company.ACC, GACL, Grasim have moderate PE ratio which is good and there are less riskier as far as investment in these companies is considered. As far as net operating margin is considered GACL has reported highest growth 22.27% followed by Grasim 14.89% while India cements is still recovering from losses. Looking at the debt equity ratio we can say that the companies are aggressively reducing their debt which is a positive sign for the growth of the companies Future outlook The consumption of cement is determined by factors influencing the level of housing and industrial Construction, irrigation projects, and roads and lying of water supply and drainage pipes etc. These factors in turn are determined by the level and growth of GDP and its sectorial composition, capital formation, development expenditure, growth in population, level of urbanization etc. But the domestic demand for cement is mainly from the building activities and infrastructure development. The government paved the way for entry of private sector in road projects. It has amended the National Highway act to allow private toll collection and identified projects, bridges, expressways and big passes for private construction. The budget gave substantial incentives to private sector construction companies. Ongoing liberalization will lead to increase in industrial activities and infrastructural development. Also, tax benefits for housing sector is a major positive for the industry. In the light of these factors, it is hoped that Indian cement industry shall witness reasonable growth in near future. Demand for cement is expected to peak, as economic growth is taking place. Also the yoy increase in cement prices in FY05, the earnings are expected to remain high in FY05. As per the estimates, the combined earnings of ACC, Gujarat Ambuja and Grasim are expected to grow by 33% in FY05. As a result, valuations will continue to remain firm. ...read more.