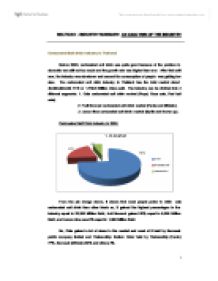 Marketing Analysis of the Carbonated Soft drink Industry in Thailand

Product quality that it is very important for consumers to consider is the Thai version is sweeter and not carbonated. It states very clearly in two languages on the can that it's caffeine free. And they use red color and design to attract more consumers in the shelf store especially in teenager that they will like in design of this brand. The ingredients listed here are a bit small to see, but it says: "Main ingredients (approximate): Sugar 11.7%, artificial flavors, and natural colors. Contains preservatives." Taste is very sweet. There's far less carbonation than either Pepsi or Coke, almost so that it seems flat. But after drinking a few swigs, the aftertaste of the sugar stayed a long time. Company Portfolio Product Age Energy drink Soft drink Wine Women drink Green tea Coffee Sport Drink Kid Red Bull Cola Teenager Red Bull Cola Spy Wine Cooler Puriku White tea Sponsor Adult - Red Bull Extra - Look tung Monsoon Valley Spy Wine Cooler Puriku White tea Krating Daeng Coffee Sponsor Elder - Red Bull Extra - Look tung Monsoon Valley Space Analysis Aggressive quadrant Red Bull Cola has a good financial position because of it has a good performance of product line like Red Bull Energy drink that makes the company has high profit. The market of carbonated soft drink is attractive because the size is very big and can hope for profit even gains less market share. But the important point is Red Bull has to face with strong competitors. Also the environmental stability is an external factor that has a high effect that suffers overall industry and it has to be concerned. Space Matrix Industry Dimensions Environment Stability 1 2 3 4 5 6 Remark Political stability [ low - high ] V 2 Rate of inflation [ high - low ] V 2 Entry barriers [ low - high ] V 1 Competitive pressures [ high - low ] V 1 Technological changes [ high - low ] V 5 ...read more.

Alliances Red Bull cola should join with snack such as Lays in buying cola combine with lays will get discount only at 7-11 Add Value It should add value in pricing differentiation for low price, product differentiation for no caffeine and less carbonate, promotion and channel differentiation for discount, e-commerce, and expand to the grocer shop. Also, it should add value in image for being sponsorship in Olympic, extreme and motor sport. Product mix Red Bull has many product mixes in their company such as Red Bull energy drink, Red Bull Cola and grape wine. Reduce cost It should reduce warehousing cost and transportation cost ex; Red Bull Co. distributes Red Bull Cola to the retailers for every two weeks. So, Red Bull should change to distribute the products to the retailers for 3 weeks in more quantities. RECOMMENDATIONS Red Bull Cola still not improve in some process and need to analyze their company performance to make it better and develop to compete with a big brand in the market because if it use just only low cost to compete, it may difficult to penetrate the market because people now more concern in value of the product so, Red Bull need to use 4 actions framework of blue ocean strategy to create value innovation that provide more ways for customers. Reduce - Sponsorship for less attractive activities. - Unskilled labors because the efficient task comes from skill labors. Eliminate - Old brand image that more target on low-income person. - Some production process. Create - None chemical ingredient. - Using herb to be ingredients. - Mix Red Bull energy drink with Red Bull Cola to be a new product. - Create more Red Bull soft drink by mix with fruit flavored. Raise - Size to have many sizes (can and bottle) - Distribution channel through wholesalers and retailers. - Advertisement through TV, radio and booths in department stores. - Improve technology in online service and online selling. - R&D cost in Red Bull Cola to improve it to have more product line ?? ?? ?? ?? 1 ...read more.