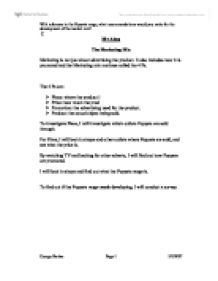 Marketing is not just about advertising the product. It also includes how it is promoted and the Marketing mix metimes called the 4 Ps.

C My Aims The Marketing Mix Marketing is not just about advertising the product. It also includes how it is promoted and the Marketing mix metimes called the 4 Ps. The 4 Ps are: > Place: where the product i > Price: how much the prod > Promotion: the advertising used for the product. > Product: the actual object being sold. To investigate Place, I will investigate which outlets Poppets are sold through. For Price, I will look in shops and other outlets where Poppets are sold, and see what the price is. By watching TV and looking for other adverts, I will find out how Poppers are promoted. I will look in shops and find out what the Poppets range is. To find out if the Poppets range needs developing, I will conduct a survey. Poppets Questionnaire 1. Which of these age groups are you in? 2. Gender? 3. How often do you buy sweets or chocolate? 4. Have you ever bought Poppets before? 5. How much money do you spend on sweets per week, on average? ...read more.

Paynes have never forgotten about their reputation as a maker of fine confectionary, and hold up that reputation. In June 1998, Paynes were bought by Northern Foods, a much larger company. Because of this new ownership, their company could easily have lost most of it's market share or gained a much larger one. If Northern Foods had decided to cut Payne's funding, the company would lose its share of the market. If they increased it, Payne's would have the opportunity to expand into other market segments. Mars: 33p Revels: 32p Bounty: 33p Poppets: 31p As you can see, Poppets are priced to undercut their competitors. If they had used a different type of pricing, they might have ended up with an uncompetitive price. Because they used competition-based pricing instead, they got a highly competitive price that probably increased their sales. Place is where the product is sold, e.g. a supermarket, a corner shop, a service station or any other kind of shop. During my research I found Poppets being sold at all of the nearby supermarkets, as well as the nearby Swavesey service station. ...read more.

I think this because the shops - who would have bought Poppets from the wholesaler - would just not stock the product instead. If it was a more popular and better-known product, such as Mars or Skittles, the shops would be happy to go out of their way and go to the manufacturer to get the product. After all, the shop could lose the business of the customer if they don't stock the customer's favourite kind of snack - and a lost customer is lost profit. As you can see, Poppets are available at almost any store. This is a good way of developing a 'fan base' - a group of people who like the product and will continue to buy it. If the Puppets are sold in the same place as other similar products, the lower price of Poppets can easily be a deciding factor in whether a possible customer either buys their product, or a competitor - e.g. a Mars bar. With reference to the Poppets range, what recommendations would you make for the development of the market mix? George Barkas Page 1 5/1/2007 ...read more.