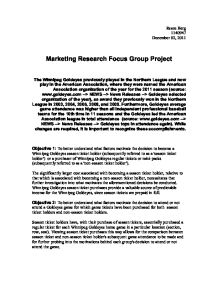 [ ] YES [END WITH THANKS] [ ] NO ** Compensation for this focus group is outside the typical 2-hour focus group compensation range due to the very select Goldeyes clientele we wish to recruit for our focus groups. It would, in all likelihood, not be achievable without considerable effort and, as a consequent, comparable expense, to find families for whom both parents could afford to partake in a focus group simultaneously (as per the Recruiting Specifications preceding this section). For many families, this would require hiring a babysitter, something we are essentially offering to pay for by compensating at this level, rather than at typical rates. The individuals who are in positions which grant them the ability to offer Goldeyes tickets to staff will, in all likelihood, not be participating, should they choose to do so, for the monetary incentive (this is what we want -- sufficient compensation so as to be respectable but not so much as to encourage people to participate who don't actually care about the Winnipeg Goldeyes Baseball Club). Because what we are offering here is a gift certificate and not cash, the net cost to the Winnipeg Goldeyes Baseball Club shall in all likelihood not exceed typical 2-hour focus group compensation rates, though a direct comparison between compensation provided here and typical rates would be individual-specific, depending on what each $125 gift card was ultimately spent on. ...read more.