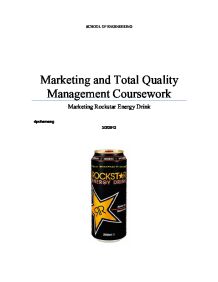 SCHOOL OF ENGINEERING Marketing and Total Quality Management Coursework Marketing Rockstar Energy Drink dpchemeng 3/2/2012 'The Rockstar Elixir' Executive Summary In the highly competitive energy drink category, market share is determined primarily by the cunning and creativity of marketers who aim to differentiate their product from competitors by creating something that represents more than just a drink. Because of the similarity in taste and ingredients of the 210 North American brands the efficacy of each marketing plan is the prime driver of market sales. RockstarTM will kick-off 2012 with an intensive marketing campaign, aimed to increase brand awareness, and expand market share in the UK. This report will describe the marketing plan that will be implemented, based around the 4 p's, which are product, price, place and promotion. Market share expansion is not only possible, but expected, given excellent taste test results. Shifting demographics such as growing Black and Hispanic young adult population, along with the consumers that Red BullTM captured with its first-to-market products, who are aging, are creating gaps in the market that Rockstar must be vigilant to fill. The advertising plan will continue its grass-roots, non-traditional theme, which resonates strongly with Rockstar's demographic. The advertising plan will include a short commercial description featuring musicians and athletes sponsored by Rockstar Energy. The UK marketing campaign will aim to minimise gender biases, which have created a lag in female sales in the US due to distinctively masculine branding. The objective of the campaign is also to broaden the Rockstar demographic which has traditionally been young adult and teen gamers/metal genre listeners. In the UK the new slogan "The Rockstar Elixir" will be used on the drinks and in campaigns. Quantifiable marketing objectives are outlined: 2nd place market share in the UK with 17% by 2014, and a 300% increase in distribution outlets by 2013. �620,000 has been allocated to the UK marketing budget in 2012. ...read more.

and shows the process of brand development which will take place throughout the year of 2012 to develop a stronger and better defined brand image. The steps take place in a clockwise direction. Advertising Philosophy The current Rockstar advertising philosophy has worked well resulting in a third place market share. Generally non-traditional advertising has been utilised, such as event and artist/athlete sponsorship that represent the Rockstar philosophy, that being living life to the maximum. This grassroots and viral form of communication with the public resonates strongly with potential customers who tend to be sceptical of traditional marketing, having been saturated with it since a young age. In the survey conducted by Burke, L. et al (2009) each energy drink user commented that they had started drinking their respective brand because of a recommendation from a friend. The three top brands have used cars to increase brand awareness and distribute samples (Martin Interview 2008) which is an excellent marketing strategy. Providing free samples might prove particularly useful because customer research showed excellent taste test ratings but lacked brand awareness. Often customers said it tasted better than they thought it would. (Burke, L. et al 2009) Taste tests performed by (Burke, L. et al 2009)) have shown that consumers often mistook Rockstar for Red Bull, primarily because they prefer the taste of Rockstar but associated the preferable taste with the leading brand (Red Bull) not with the 3rd place brand. Consumer research was conducted by (Burke, L. et al 2009) in which 11 students from Penn State University were questioned on their thoughts and preferences regarding major energy drinks. Monster is the second most popular energy drink, however 3 participants didn't like the Monster logo, and most didn't like the taste. From the feedback, what is obvious is Rockstar ranked very well in the taste tests but lacked popularity by the participants either because they had never tried it, or had potentially negative associations with the brand. ...read more.

The individual performances are now coming fast, reaching a crescendo, as the camera pulls back, many individual clips can be seen on the same screen. The camera continues to pull back, as the individual clips morph into bubbles that seem to be rising. As the camera pulls back further, the energy drink can is revealed, it appears to be shaking with a kind of vibrant life energy. The can rocks back and forth, slowly settling down until it is motionless. The Rockstar brand which was visible on the athletes/musicians throughout the montage is clearly visible on the can, along with the new slogan 'The Rockstar Elixir.' The video is set to music which emulates the growing pace and energy of the scenes. One important side note that Rockstar will convey throughout their adverts is that the athletes/musicians are not selling out to the brand. In fact mutually beneficial partnerships are created where the sponsored athletes/musicians can perform genuinely better and produce more because of their sponsorship with Rockstar. Conclusion The 2012 marketing campaign has been outlined, and is set to rocket Rockstar to the number 2 position of the British energy drink market. The campaign will utilise a number of grass roots promotions aimed to create brand awareness and momentum this side of the Atlantic, as well as traditional print advertising using a budget of �620,000. Marketing strategy plays the most important role in determining market share, in the rapidly growing energy drink market. It has been shown why the typical product lifecycle doesn't generally apply to this sector, which can mean excellent profit margins can be obtained indefinitely, as long as consumers perceive they are making a lifestyle choice when they buy the brand. Even consciously, consumers recognise that spending a little extra on the more expensive brands means they get to see their favourite athletes and artists more often and with greater resources for creativity that come from Rockstar sponsorship. Considering the British campaign goes well Rockstar Inc. will look to emulate the success in other countries such as Australia, New Zealand and many other countries. ...read more.