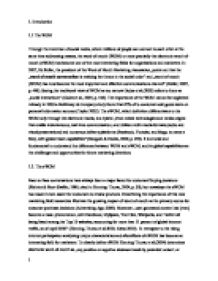 Marketing - Through the invention of social media, where millions of people can connect to each other at the same time addressing masses, the word-of mouth (WOM) or more precisely the electronic word-of-mouth (eWOM) has become one of the most interesting

1. Introduction 1.1 The WOM Through the invention of social media, where millions of people can connect to each other at the same time addressing masses, the word-of mouth (WOM) or more precisely the electronic word-of-mouth (eWOM) has become one of the most interesting fields for organizations and marketers. In 2007, Ed Keller, the president of the Word of Mouth Marketing Association, points out that the "word of mouth conversation is retaking the throne in the social order" and "word-of-mouth (WOM) has now become the most important and effective communications channel" (Keller, 2007, p. 448). Seeing the traditional view of WOM as too narrow Godes et al.(2005) refers to them as "social interactions" (Godes et al., 2005, p. 416). The �mportance of the WOM cannot be neglected: Already in 2003 a McKinsey & Company study found that 67% of to consumer sold goods were on personal information sources (Taylor 2003). The eWOM, which definition differentiates to the WOM only through the electronic media, is a hybrid "from mixed technologies and media origins that enable instantaneous, real-time communication, and utilizes multi-media formats (audio and visual presentations) and numerous delivery platforms (Facebook, Youtube, and blogs, to name a few), with global reach capabilities"(Mangold & Faulds, 2009, p. 359). It is crucial and fundamental to understand the difference between WOM and eWOM, and its global capabilities are the challenges and opportunities for future marketing directions. 1.2. The eWOM Face-to-Face conversations have always been a major factor for customers' buying decisions (Richins & Root-Shaffer, 1988, cited in Henning-Thurau, 2004, p. 39), but nowadays the eWOM has made it even easier for customers to review products. Underlining the importance of this new marketing field researches illustrate the growing impact of word-of-mouth as the primary source for customer purchase decisions (Advertising Age, 2008). Moreover "user-generated content has [even] become a mass phenomenon, with Facebook, MySpace, YouTube, Wikipedia, and Twitter all being listed among the Top 15 websites, accounting for more than 11 percent of global internet traffic, as of April 2010" (Henning-Thurau et al.2010; Alexa 2010). ...read more.

The second series of ads showed six "average" women in white underwear, Kathy O'Brien, Dove's marketing director said they wanted the ads to "provoke discussion and debate about real beauty"(Deighton, 2007, p.4). Next step was first a movie, but then turned into an ad, however no product was mentioned. One small girl is shown she "hates her freckles", and an young Asian who "wishes she were blonde." It ran in 2006 broadcast of the Superbowl. Stage four of the Real Beauty campaign involved a movie named "Evolution". In October 2006 it was posted on YouTube, and within three months, it had been viewed three million times. The movie never ran on television, except in the context of news. This movie went viral through the social communities and, thus the marketing strategy encompassed two worlds the "real" and the "electronic" world. Finally in late 2006 the last step was announced. The contest "Real Ads by Real Women", where consumers created their own ads for a new product, and winning commercials would air in the commercial break on the annual Academy Awards in February 2007. This final chapter perfectly integrates consumers in their marketing concept to use them as a marketing vehicle. But was it successful? Philippe Harousseau, Unilever's former Marketing Director for the Dove Skin and Masterband, knew that their campaign is effective as Dove's firming girls were shown 16 minutes on the Today Show. Moreover through the ad "Hates her freckles" aired during the Superbowl, news programs echoed the message, Oprah Winfrey dedicated a show to self-esteem, with the ad as a centerpiece. Jay Leno ran a parody and Wal-Mart created their version of the ad featuring its employees (Deighton, 2007, p. 1-6). This concept as a perfect example for viral marketing strategies, therefore I will sum up this campaign shortly: First, the Tick-Box campaign, which involved consumers through telephone calls and online votes. ...read more.

260). Moreover "in the era of social media, marketing managers' control over the content, timing, and frequency of information is being severly eroded." (Mangold & Faulds, 2009, p. 360). Customer-generated media, also known as social media (Mangold & Faulds, 2009), and customer-integrated marketing by using viral marketing strategies (e.g. The Diet Coke and Mentos experiment, Kaplan & Haenlein (2011)) seems to become the most interesting advertising field, also because even with a low-budget millions of people can be addressed (e.g. the movie "Paranormal Activity" in the U.S.). According to the subject of my study, I will now highlight important areas for future research. First research has to be done how companies can gain usable information on consumer activities generated in such communities. Generating, measuring and understanding these online interactions are crucial to market products, but also for customer relationship. "At this point, it is also unclear how existing brand relationships are affected by new media services" (Henning-Thurau et al., 2010, p. 317). Second, the difference between all facets of eWOM has to be clarified, especially the differentiation between pcWOM and mWOM (mobile word-of-mouth) and their unique capabilities (Okazaki, 2009). In India, already, phones outnumber Pcs by 10 to 1 and in Thailand, for example, 13% owns a computer, while 82% have access to a mobile phone (Kaplan & Haenlein, 2009). For marketers the mWOM seems to be a remarkable sector, because of the ability to communicate with a mass amount of people in real-time. Finally, the cultural differences are important and cannot be neglected. The advantage being able to address millions in seconds also has negative aftereffects, such as being confronted with negative publicity due to unique cultural mannerism, for example. Mikhailitchenko et al. (2006) findings indicate a difference in managerial styles and interorganizational relationship strategies in SMEs (small and medium-sized enterprises), but more research has to be done on multinational companies and therefore multinational strategies. In the times of globalization and social media expansion cross-cultural marketing strategies gain more and more importance and "should be of particular relevance for customer relationship management" (Henning-Thurau, 2010, p. 312). ...read more.