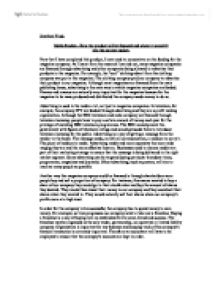 Media Studies - How the product will be financed and where it would fit into the current market.

Jonathan Youd. Media Studies - How the product will be financed and where it would fit into the current market. Now that I have completed this product, I now need to concentrate on the funding for the magazine company. As I learnt from the research I carried out, many magazine companies are financed through advertising and other companies being allowed to advertise their products in the magazine. For example, the "cool" clothing advert from the clothing company was put in this magazine. The clothing company paid our company to advertise their product in our magazine. Although most magazines are financed from the main publishing house, advertising is the main way in which magazine companies are funded. Finance and revenue are naturally very important for the magazine because for the magazine to be mass produced and distributed the company needs money to do so. Advertising is used in the media a lot, not just in magazine companies. In television, for example, the company ITV are funded through advertising and they are a profit making organization. ...read more.

For instance, if someone wanted to buy a share of our company they would go to their stockbroker and buy the amount of shares they desired. They would then invest their money in our company and they could sell their shares when they wanted to. They would naturally sell their shares when our company's profits were at a high level. In order for the company to be successful, the company has to spend money to earn money. For example, as time progresses our company wish to take out a franchise. Buying a franchise is a way of buying into an established firm's name, brand and success. The franchise may be organised as the sole trader, partenership, co-operative or limited liability company. Organisation is important for any business and keeping track of the comapny's financial transactios is extremely important. Therefore an accountant will have to be employed to ensure that the coampny's accounts are kept in order. Naturally to begin with the company will have to take out bank loans and overdrafts to finance the start of the company. ...read more.

I am fairly confident that there is a place for this product in the current media market. The research I conducted proved that most magazines intended to appeal to teenagers are most the same. For example teenage girls' magazines consisted of predominantly fashion and beauty whereas Boy's magazines consisted of sport, cars and computers. It is, I think, important to produce a magazine that encompasses a wide variety of different conventions to ensure that the magazine appeals to wider target audience. As indicated by the audience research 90% of the interviewed subjects preferred a variety as opposed to one narrow content for the magazine. I also think there is a place for the product in the current market because there are not many products that exist that are intended to appeal to both sexes. As I learnt from the research I conducted on advertisements and existing products, there are many stereotypes that exist in the current media; my product will hopefully revolutionize these stereotypes, therefore creating a magazine that differs from existing products. ...read more.