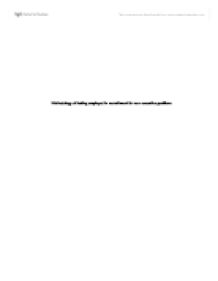 Methodology of testing employed in recruitment for non-executive positions

Methodology of testing employed in recruitment for non-executive positions Executive Summary Companies recruit personnel for blue collar and office support roles in order to fill a requirement in the organisation for certain tangible skills and competencies. The personality of these individuals in most cases is deemed less important than the skills that they hold. Due to the nature of non executive recruitment skill based testing such as typing or welding tests which prove a candidates competence is much more relevant than personality tests. The decision to test is dependent on the philosophy of the organisation. Extreme care should be taken with regard to the legal ramifications that may occur if the testing can be construed as unnecessary, discriminatory, or not directly related to the skills or physical restraints of the job. Testing may also be costly. If it is decided to conduct testing it is best to specifically determine the reason and the objectives for doing so (Luszez & Kleiner, 2000). In today's market, testing is sold to recruitment companies as a quick fix solution. Recruitment firms need to stop and analyse their whole recruitment process in order to check the time versus return of investment value of some of these tests. In most cases traditional methods still produce the best and most cost effective results. Table of contents Executive Summary 2 1.0 Introduction 4 2.0 Discussion 6 2.1 Recruitment process 6 2.2 Types of tests and grading mechanisms available 6 2.3 Integrated Group Ltd approach 7 2.4 Strengths of Psychometric and Skills tests 8 2.5 Rising popularity of Psychometric and Skills tests 9 2.6 Context Validity of Psychometric and Skills tests 11 3.0 Conclusion/summary 12 4.0 References 14 Introduction Selection of employees based on their psychological traits has traditionally been viewed as a recruitment strategy exclusive to the executive sector. With an increase in competition and higher employer expectations, psychometric and skill testing is one tool that is becoming more popular across all markets of recruitment (Lievens, Van Dam & Anderson, 2002, Terpstra, 1994). ...read more.

Cann, Personal Communication, August 5, 2004). Personality testing of existing employees is a good way for companies to set a benchmark using existing employees to understand what traits fit well with particular roles, and use this as a measuring "stick" against future applicants. It is easy to over rely on testing in the recruitment process and base selection decisions on the results. A personality test should not be the sole tool used for selection instead personality testing should be used as part of a holistic recruitment testing (N. Di Ciano, Partner MSA Recruitment, Personal Communication, August 13, 2004). Strengths of Psychometric and Skills tests Psychometric and skills tests are the most objective of all recruitment methods. An applicant can try and fake it, but a reliable questionnaire will pick up inconsistencies. More manipulation occurs at the CV level where candidates can easily extend the period of or close gaps in their work history. Dalen, Stanton, & Roberts, (2001) conducted an investigation into the extent to which it is possible to fake a personality questionnaire to match the ideal candidates profile. The results of the study showed that all candidates were unable to falsify their responses to match the ideal profile for the job. This was due to individuals selectively being able to manipulate their response on scales rather than inflating all scales. Skills testing for tangible abilities and competencies are extremely useful in screening candidates that do not meet the inherent requirements of the position. Welding tests for welders, typing tests for secretarial roles as well as Microsoft Office tests for office support roles allow the recruiter to use objective measurements in order to gauge the candidates suitability for certain positions. In fact, employers often state the benchmark, which must be achieved such as advanced word ability or 65 words per minute typing ability. In certain cases safety is the basis behind set standards. ...read more.

If it is decided to conduct testing, it is best to specifically determine the reason and the objectives for doing so. (Luszez & Kleiner, 2000). Skills tests are useful for measuring tangible abilities and competencies directly related to the job requirements. In addition the testing should be administered and similarly, if required, interpreted by suitably trained persons. In the low margin high volume market of blue-collar recruitment, personal factors such as reliability and loyalty would be much more valued traits than written English comprehension. The administration of a twelve-minute test does not produce a valuable return on investment when the individual is a casual employee who may work for the organisation for only one day. It seems Integrated, for the most part, is still in the dark ages with respect to critical issues relating to candidate testing. Archaic paper and pencil tests are used which have little to do with the context that the candidate will be operating in. In addition, due to high internal turnover, consultants conduct interviews with little training in how to ask probing questions and get the important information out of an interview, which is deemed essential by Frank & Jaffee, 1995. The dangerous result of these factors is an over reliance on test scores that may not measure the right areas. Finally, personality tests may be much more effectively used as a means of structuring an interview, rather than as a single predictor. Indeed several of the respondents in the Dakin et al. (1994) study reported that they used personality testing as a tool during interviews. They provide the results to the candidate, explaining what the client company was looking for. The results are then discussed and a careful exploration made of variances between the individual's results and the clients expectations. This application provides a much fairer use of testing during the selection process. In conclusion for testing to be useful and fair it should be directly relevant to the job specifications and measure critical competencies essential for the successful performance of the job. ...read more.