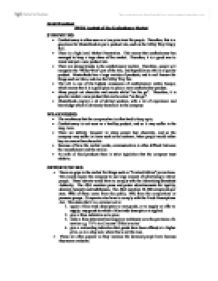 STRENGTHS * Confectionary is often seen as a low price treat for people. Therefore, this is a good area for Masterfoods to put a product into, such as the Milky Way Crispy Roll. * There is a high level Market Penetration. This means that confectionary has managed to keep a large share of the market. Therefore, it is a good area to invest and put a new product into. * There are strong brands in the confectionary market. Therefore, people will recognise the "Milky Way" part of the title, and hopefully see this as a quality product. Masterfoods has a large variety of products, and is well known for things such as Mars, and also the Milky Way Bar. * The UK is one of the highest consumers of confectionary within Europe, which means that it is a good place to place a new confectionary product. ...read more.

* As with all food products there is strict legislation that the company must abide to. OPPORTUNITIES * There are gaps in the market for things such as "Limited Edition" promotions. This would require the company to use large amount of advertising to attract people. These adverts would have to comply with the Advertising Standards Authority. The ASA monitors press and poster advertisements for legality, decency, honesty and truthfulness. The ASA monitors 10, 000 complaints per year, 90% of these come from the public, 10% from the competitors or pressure groups. Companies also have to comply with the Trade Descriptions Act. This states that it is a criminal act to: 1. apply a false trade description to any goods, or to supply or offer to supply, any goods to which a false trade description is applied 2. ...read more.

* There is now a big campaign about health. This is not likely to decrease and so people will be encouraged even more to stay away from things such as confectionary. * Many retailers (especially supermarkets) are now doing there own brands. This affects other brands because the retailers may choose to place their own brands in better places on the shelves. They are also often cheaper, and so this will attract a lot of people. * The demographic pattern of Britain at the moment is that it is ageing. There is a bigger ratio now of old to young then there has been for a long time. Older people generally eat fewer things than young people, and so this could have an impact on the business, as sales may fall. David Broadbent SWOT Analysis of The Confectionary Market ...read more.