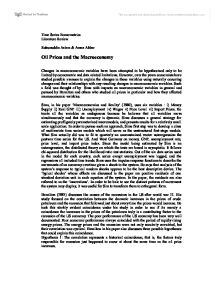 Time Series Econometrics Literature Review Rukunuddin Aslam & Amna Akbar Oil Prices and the Macroeconomy Changes in macroeconomic variables have been attempted to be hypothesized only to be limited by econometric and data related limitations. However, over the years economists have studied possible avenues to explain the changes in these variables using naturally occurring changes and their relationships with any resulting changes in macroeconomic variables. Such a field was thought of by Sims with impacts on macroeconomic variables in general and pursued by Hamilton and others who studied oil prices in particular and how they affected macroeconomic variables. Sims, in his paper 'Macroeconomics and Reality' (1980), uses six variables : i) Money Supply ii) Real GNP iii) Unemployment iv) Wages v) Price Level vi) Import Prices. He treats all the variables as endogenous because he believes that all variables move simultaneously and that the economy is dynamic. Sims discusses a general strategy for estimating profligately parameterized macromodels, and presents results for a relatively small scale application. In order to pursue such an approach, Sims first step was to develop a class of multivariate time series models which will serve as the unstructured first-stage models. What Sim actually did was to fit to quarterly an unconstrained vector autoregression the postwar time series for the US. And West Germany on money, GNP, unemployment rate, price level, and import price index. ...read more.

Then he allows for an asymmetric response to oil price changes by specifying real price increase and decrease as separate variable and test the individual significance, symmetry of the responses and stability of this specification over the sample. Mork, however believed that PPI used by Hamilton for crude oil is misleading because it reflects only the controlled prices of domestically produced oil. Mork then derives a separate index to measure crude oil which also includes the refiner acquisition cost (RAC). However, the data tested by Mork do not identify any significant effects of oil price declines. They do show convincing results that the effects of oil price declines are different from those of price increases. Mork also claims 'these results confirm that the negative correlation with oil price increases is not an artifact of Hamilton's data. On the other hand, an asymmetry in the responses is quite apparent in the correlation with price decreases is significantly different and perhaps zero. Further research is needed to verify this view empirically.' (Mork) Hooker(1996) too studied the correlation between the oil price changes and the macroeconomic variables. However, in his study, he claimed that oil prices no longer Granger cause many US macroeconomic indicator variables in data after 1973. Hooker argues that it is ironical that the usage of oil prices as an explanatory variable has increased even though the significance of the oil's impact on the economy seems to have dramatically decreased. ...read more.

Oil importers follow the normal impact as discussed by others above. This paper however claims that granger causality is true for both ways for oil prices and GDP growth for most of the countries, a result specific to this author's data. He also studies the performance of different models, concluding that non linear models give more accurate results for most countries, something proven by the Hamilton and Cunado. This study also shows that non volatile markets show more precise and greater impacts of oil price changes which has something to do with certainty levels in the respective markets. Theoretically too, scaled models that allow for more controlled variables are bound to show more precise impacts. Therefore, Oil prices are a very important determinant of macro economic variables. As is shown by a number of economists, they at the very least granger cause economic activity which ties them up with the occurrence of recessions. As Hamilton's theory stands to be supported yet again with the most recent recession in the United states, it is not wise to ignore any indication provided by oil prices even though direct causality cannot be proven. More data with newer techniques can help define the relationship more precisely and also relate to oil importer/exporter status. Strategies to study the relationship over the years have varied in terms of the VARs and lags studied which makes comparison tricky. However, these differences are not enough to discredit any of them even though results are vary susceptible to the empirical strategy used. ...read more.