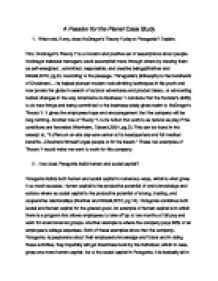 A Passion for the Planet Case Study 1. What role, if any, does McGregor's Theory Y play at Patagonia? Explain. First, McGregor's Theory Y is a modern and positive set of assumptions about people. McGregor believed managers could accomplish more through others by viewing them as self-energized , committed, responsible, and creative beings(Kreitner and Kinicki,2010, pg.8). According to the passage, "Patagonia's philosophy is the handiwork of Chouinard....He helped pioneer modern rock-climbing techniques in his youth and now prowls the globe in search of outdoor adventures and product ideas...or advocating radical changes in the way Americans do business." I conclude that the founder's ability to do new things and being committed to the business solely gives realm to McGregor's Theory Y. It gives the employees hope and encouragement that the company will be long running. Another role of Theory Y, is its notion that work is as natural as play if the conditions are favorable (Wertheim, Edward,2004, pg.3). This can be found in the excerpt at, "It offers an on-site day-care center at its headquarters and full medical benefits...Chouinard himself urges people to hit the beach." ...read more.

How does this case bring the profile of the 21st-century manager to life?Explain. Working for a company in the 21st-century is completely different than that of previous times. Managers of today have a whole new sense of managing a company. Instead of be the order giver or controller, they are the advocate or coach. Some others differences are with resisting change to facilitating change. In the A Passion for the Planet, the manager shows these new features such as always thinking for the employee, treating everyone as an equal, and using human capital instead of the employee being a potential problem. I am relly glad that I was brought up in the 21st-century workforce because I feel it is better for the manager, employee, the employee's spouse and children and everyone that comes in contact with the employee. The evolution of the 21st-century manager was necessary for the new group of workers coming into the workforce. It really seems impossible for workers to have high self-esteem when their manager had a competitive interpersonal relationship. ...read more.

5. What appeals to you (or does not appeal to you) about working at Patagonia? Explain. Having a 21st-century manager is a big appeal to me because I like to have a good relationship with my boss. I feel that being afraid or look as not equal ruins the company's productivity. Another thins that I really like about Patagonia is that it is a small company with a big company's attitude; the employees feel that this company is the best and that their whole effort is put into this place. 'Few Patagonians are it for the money' really stuck to me and shows that making money is just the extra bonus but to actually work and engineer this company is what the employees strive for. So, would I work for Patagonia? Yes and No. I would definetely work for this company due to all the great attributes listed above and talked about in the previous questions but the only reason why I wouldn't is because its not my area of study. Overall, I would definetely recommend applying for a job at this company due to its great niche in helping its employees. ...read more.