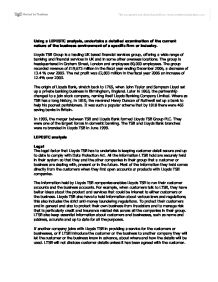 Using a LEPESTC analysis, undertake a detailed examination of the current nature of the business environment of a specific firm or industry. Lloyds TSB Group is a leading UK based financial services group, offering a wide range of banking and financial services in UK and in some other overseas locations. The group is headquartered in Graham Street, London and employees 80,000 employees. The group recorded revenue of �19,673 million in the fiscal year ending December 2006, a decrease of 13.4 % over 2005. The net profit was �2,803 million in the fiscal year 2006 an increase of 12.4% over 2005. The origin of Lloyds Bank, stretch back to 1765, when John Taylor and Sampson Lloyd set up a private banking business in Birmingham, England. Later in 1865, the partnership changed to a join stock company, naming itself Lloyds Banking Company Limited. Where as TSB has a long history, in 1810, the reverend Henry Duncan of Ruthwell set up a bank to help his poorest parishioners. It was such a popular scheme that by 1818 there were 465 saving banks in Britain. In 1995, the merger between TSB and Lloyds Bank formed Lloyds TSB Group PLC. ...read more.

As people will have no disposable income, they will not take out loans or credit cards; there will be no business for LTSB. Disposable income is not all about pay- it can be increased by borrowing. Retailers, manufactures and the banks have all gained from the boost in demand created by cheap credit. However, the level of personal debt has become a major problem in the UK and the citizen advice bureau dealt with 1.4 million debt problems in 2005. As the interest rate increases the house prices will fall. People would not be able to pay mortgage and thus this result of people buying new mortgage will be less. Environmental The Lloyds TSB Group is a leading UK based financial services group whose businesses provide a comprehensive range of banking and financial services in the UK and overseas. Their potential impact on the environment stems from office based operations and to a large extent, this indicates where the bank can make progress in improving its environment performance. The key areas where LTSB need to focus are property management, purchasing, contract and lending activity. According to my research LTSB are planning to improve on their environmental issues. ...read more.

At the end of 2006, they were Europe's 13th largest bank in terms of market capitalization. They have over 63,000 employees worldwide serving some 16 million customers. Their operation in the UK serves both urban and rural communities through a network of over 2,000 branches, coupled with Internet and telephone banking services. Their subsidiaries include Cheltenham & Gloucester and Scottish Widows. Their vision is to make Lloyds TSB the best financial services company, firstly in the UK, and then in other markets. They will develop their relationship management skills in each of their businesses, so they better understand and meet their customers' needs, and create more value for them than the competitors can. This means providing highly competitive products and superior customer service including their basic bank account. Lloyds TSB main competitors are HSBC PLC, Barclays, Royal Bank of Scotland. Conclusion A LEPESTC is crucial for any firm or organisation especially for a firm like Lloyds TSB. One of their growing concerns is the current economic position of UK as the country is heading towards recession this could be a threat for LTSB. Their competition would also have this as one of their main objective and the law is making this one of their objective as with the recent rejection with the merger of LTSB with HBOS. However, these analyses can be used in any environment at any time. ...read more.