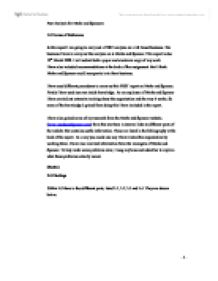 1.0 Terms of Reference In this report I am going to carry out a PEST analysis on a UK based business. The business I have to carry out the analysis on is Marks and Spencer. This report is due 10th March 2008. I will submit both a paper and electronic copy of my work. I have also included recommendations at the back of the assignment that I think Marks and Spencer could incorporate in to there business. I have used different procedures to carry out this PEST report on Marks and Spencer. Firstly I have used my own inside knowledge. As an employee of Marks and Spencer I have carried out extensive training about the organisation and the way it works. So some of the knowledge I gained from doing this I have included in the report. I have also gained some of my research from the Marks and Spencer website. (www.marksandspencer.com) from this site there is internal links to different parts of the website that contains useful information. These are listed in the bibliography at the back of the report. In a way you could also say I have visited the organisation by working there. I have also received information from the managers of Marks and Spencer. To help make some problems clear, I rung my boss and asked her to explain what these problems actually meant. ...read more.

By doing this Marks and Spencer can improve there organisational performance and effectiveness, a recent example of this within Marks and Spencer is that they have opened 'Simply Food' stores. These are Marks and Spencer stores that just sell food. They have improved there performance because they are making more profit and reducing overheads. E.g. there won't need extra space for textiles. Mullins said that 'the PEST analysis is one tool for both analysing the current situation of an organisation and planning its development. Political, economical, social and other influential areas are clearly of great importance to the planning process.' So from carrying out a PEST analysis Marks and Spencer can plan the development of the company for the future. Management and Organisational Behaviour, Laurie J. Mullins. While I was brainstorming I came up with a few statements of why it is useful for a business to carry out a PEST analysis. Two points that stood out form the rest are that a PEST analysis is helpful for a company to change there business environment and that a PEST analysis is a good tool to help businesses survive. From my research I came across the history of Marks and Spencer. Listed in the history was the date that the original founders Michael Marks and Tom Spencer formed partnership. The date was 1894, so this means Marks and Spencer as a company has been going strong for 114 years. ...read more.

Pub Thomson Texere October 2003). Another economic factor that could effect Marks and Spencer's as a company is the interest and exchange rates. In the UK we have a fixed exchange rate system. The government keeps the exchange rate fixed by manipulating the interest rates. If the exchange is in danger of falling the government needs to increase interest rates to increase demand for the currency. The government does this because otherwise this would have a deflationary effect on the economy the demand for products might decrease and unemployment might increase. Fixing the exchange rate is not easy as there are many variables which are changing over time if the exchange rate is set wrong it might be hard for export companies to be competitive in foreign countries. International disagreement might be created when a country sets its exchange rate on a too low level. This would make a countries export more competitive which might lead to a disagreement between countries as they might see it as an unfair trade advantage. This would then create a bad image for Marks and Spencer in there international franchises, because the foreign countries would look at M&S as a UK based business and if there's disagreement between countries, they will stop buying for Marks and Spencer which could cause serious damages for the company. They would make losses instead of profits and could be even forced to close down some stores. ?? ?? ?? ?? Pest Analysis for Marks and Spencers - 1 - ...read more.