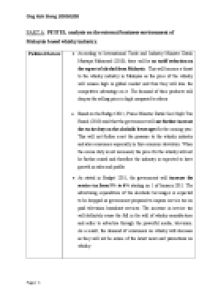 PESTEL analysis on the external business environment of Malaysia based whisky industry.

﻿Ong Kok Siong 20050208 PART A: PESTEL analysis on the external business environment of Malaysia based whisky industry. Political factors 1. According to International Trade and Industry Minister Datuk Mustapa Mohamed (2010), there will be no tariff reduction on the export of alcohol from Malaysia. This will become a threat to the whisky industry in Malaysia as the price of the whisky will remain high in global market and thus they will lose the competitive advantage on it. The demand of their products will drop as the selling price is high compared to others. 1. Based on the Budget 2011, Prime Minister Datuk Seri Najib Tun Razak (2010) said that the government will not further increase the excise duty on the alcoholic beverages for the coming year. This will not further exert the pressure to the whisky industry and also consumers especially in this economic downturn. When the excise duty is not increased, the price for the whisky will not be further raised and therefore the industry is expected to have growth in sales and profits. 1. As stated in Budget 2011, the government will increase the service tax from 5% to 6% starting on 1 of January 2011. The advertising expenditure of the alcoholic beverages is expected to be dropped as government proposed to impose service tax on paid television broadcast services. The increase in service tax will definitely cause the fall in the will of whisky manufacturer and seller to advertise through the powerful media, television. As a result, the demand of consumers on whisky will decrease as they will not be aware of the latest news and promotions on whisky. Economic factors 1. In the official statistics by Department of Statistics Malaysia, the Consumer price index (CPI) for alcoholic beverages has increased 4% in September of 2010(134.3) compared to the same month in 2009(130.3) in which the base year is in 2005(100). ...read more.

2. As in the article published in Herald Scotland (2010), Malaysia has been granted applications for ?Scotch Whisky? to be protected as a ?geographical indication of origin? (GI) by domestic laws. The high level of protection through legal ways can prevent any cheap imitations to gain market share in Malaysia while at the same time protect the integrity of the Scotch whisky. The consumers are able to drink the original whisky that is high in quality and the demand for whisky will then increase. The whisky industry will gain benefit from it as the sales of whisky will go up when all the consumers in Malaysia are consuming the only and original whisky. PART B: Analysis of the external business environment of whisky industry in Malaysia based on the three most important issues. The external business environment is always changing and not in constant. It is therefore extremely important for an industry to act and react accordingly to the current external business environment so that profit maximization can be achieved. There are three most important issues that are currently affecting the whisky industry in Malaysia that include political, economic and social factors. From the view of political issues, there are three main factors that affect the whisky industry. One of factors is that there will be no tariff reduction on the export of alcohol from Malaysia according to International Trade and Industry Minister Datuk Mustapa Mohamed (2010). It is one of the policy under the implementation of Asean Free Trade Area(AFTA)starting on Jan 1,2010.Tariffs are normally imposed on imported and exported goods in the aim to control the trade between nations to support and protect the welfare of own citizens. When there is no tariff reduction on export of alcohol, it will become a threat to the whisky industry in Malaysia as higher cost of sales needs to be incurred. This cost of sales will then pass to the consumers by setting a higher selling price on the exported whisky. ...read more.

Drinking whisky can reduce the risk for the citizens from developing cancer cells in the body. When the citizens of Malaysia aware of the health benefit from drinking whisky, more people will probably start to consume whisky and the existing consumers will also increase their consumption on whisky. This will create better opportunity to whisky industry from the side of demand for whisky and profitable of the industry. According to a new study by researchers (2010) at the National Institute on Alcohol Abuse and Alcoholism (NIAAA), National Cancer Institute (NCI), and the U.S. Department of Agriculture (USDA), alcohol reduces the quality of diet. It is stated in the study that people who drink more are also likely to eat less fruit and consume more calories from a combination of alcoholic beverages and foods high in unhealthy fats and added sugars. The increased alcohol intake and heavy calories food consumption will therefore cause a harmful effect to human health such as the formation of cardiovascular disease, certain cancers, and other chronic health problems. When more Malaysians are concerned about the finding of this new study, the demand of whisky will drop as they will be more health conscious and thus reduce the consumption of whisky. Instead of drinking whisky, they will change their taste to healthier beverages such as milk, juices, green tea and so on that provide higher nutritional value to the body. This brings a negative effect to the whisky industry in Malaysia that will cause a lower profitability. In conclusion, the three main issues that are currently facing the whisky industry bring and create more opportunities than the threats to the industry in Malaysia. The current external business environment in Malaysia will benefit the industry to have a better growth rate and achieve the expansion in size. In future, it is recommended that the whisky industry focus and emphasize on the continuous research and development so that the industry will keep on growing and become a highly competitive industry. ...read more.