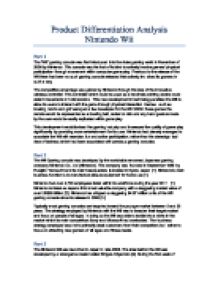 Product Differentiation Analysis Nintendo Wii Part 1 The "Wii" gaming console was first introduced into the video gaming world in November of 2006 by Nintendo. This console was the first of its kind to actively involve gamers' physical participation through movement within computer game play. Previous to the release of the Wii there had been no such gaming console released that actively involved its gamers in such a way. The competitive advantage was gained by Nintendo through the idea of the innovative wireless controller. This controller which could be used as a handheld pointing device could detect movements in 3 dimensions. This new development in technology enabled the Wii to allow its users to interact with the game through physical interaction. Games such as bowling, tennis and golf were just a few developed for the Wii. Within these games the remote would be represented as a bowling ball, racket or club and any hand gesture made by the user would be easily replicated within game play. This development revolutionised the gaming Industry and increased the quality of game play significantly by providing more entertainment for its user. Nintendo had cleverly managed to associate the Wii with exercise, fun and active participation, rather than the stereotypical view of laziness which had been associated with previous gaming consoles. Part 2 The Wii Gaming console was developed by the worldwide renowned Japanese gaming company Nintendo Co., Ltd (Nintendo). The company was founded in September 1889 by Fusajiro Yamauchi and its main headquarters is located in Kyoto, Japan [1]. Nintendo's main business function is to manufacture leisure equipment for home use [1]. ...read more.

They initiated an idea which had first surfaced in 2001 and developed it into the opportunity which it became when launched 5 years later [7]. Their initial concept involved looking at a new form of player interaction in which console gaming power is not everything; a belief stated by their gaming designer Shigeru Miyamoto "too many powerful consoles can't co-exist" [8]. Contrasting to their rival's beliefs that they developed the Wii at a much lower cost and hence affording to sell it at a lower value than the more conventional, powerful and graphic laden consoles they were in competition with. To briefly outline the consoles main features and benefits which will be expanded in further detail in section 6 the Wii is an Innovative and simple game-play console using a mix of motion sensitivity and aiming device technology. Even though it is the first of its kind to offer this it can be bought at a very affordable price which makes it appealing to a large audience of all ages. Contrasting to the stereotypical image computer games portray it offers the chance for gamers to stay healthy while still having fun as an individual or as a group. This is reflected by their release of the Wii Fit range in December 2007 which was marketed as a way to get families exercising together. Part 5 Differentiation strategy On the Nintendo Wii homepage it states "Wii is social and active entertainment that brings the whole family together" [12]. The differentiation strategy used with this particular product was very cleverly put across. ...read more.

Through opening up to a new market the Wii invited gamers of all ages from young to old. The affordable price of the complete gaming package along with the selection of game titles available meant it was a popular choice for family entertainment. Weaknesses During the period of 1996-2004 before the Wii was launched Nintendo were struggling in the gaming markets with the failure of the Nintendo GameCube and Nintendo 64 [9]. Due to the poor sales of previous consoles Nintendo didn't forecast the success of the Wii correctly and when the Wii was launched Nintendo where unable to keep up supply for game consoles. Before the Wii launch Nintendo where restricting the games which third party company's could produce for their gaming consoles. However since the launch of the Wii Nintendo has managed to resolve issues with third party companies and now more titles are available for the Wii. Nintendo aimed to produce a low cost gaming console this did however; impact on the gaming graphics which lagged greatly behind the PS3 which was launched at the same time. Opportunities The low cost of the Wii compared to its competitors has allowed the Wii to outsell all the other competition consoles in the market. The vast age group using the console has meant that if Nintendo can keep the fun factor in the Wii it will stay a popular choice among its target market. Threats Due to the current economic climate rising oil prices could be a concern for the low priced Wii. The game sales could fall due to recession cut backs by struggling families. The rise in shipping costs could impact on the transport price of each unit meaning an increase cost to the consumer. ...read more.