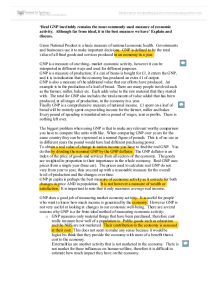 'Real GNP inevitably remains the most commonly used measure of economic activity. Although far from ideal, it is the best measure we have' Explain and discuss.

'Real GNP inevitably remains the most commonly used measure of economic activity. Although far from ideal, it is the best measure we have' Explain and discuss. Gross National Product is a basic measure of national economic health. Governments and businesses use it to make important decisions. GNP is defined to be the total value of all final goods and services produced in an economy in a year. GNP is a measure of one thing- market economic activity, however it can be interpreted in different ways and used for different purposes. GNP is a measure of production; if a can of beans is bought for �1, it enters the GNP, and it is in indication that the economy has produced an extra �1 of output. GNP is also a measure of the additional value that our efforts have produced. An example is in the production of a loaf of bread. There are many people involved such as the farmer, miller, baker etc. ...read more.

It is not however a measure of wealth or satisfaction. It is important to note that it only measures average real income. GNP does a good job of measuring market economy activity. It is useful for people who want to know how much income is generated by the economy. However GNP is not very useful at looking at changes in our economic well-being. There are several reasons why GNP is a far from ideal method of measuring economic activity: o GNP measures only material things that have been purchased, therefore cant really measure how well of a population is. Public goods such as education and the NHS are not marketed. Their contribution to the economy is assessed at their cost. This does not seem to make any sense because it would be logical to think that they provide the economy with more of a benefit than a cost to the economy. Externalities are another activity that is not marketed in the economy. ...read more.

However a part of the payment would appear as GNP. The part that appears on GNP is the profit that the dealer made on the car as the value of the service that the dealing provided. Economic welfare is usually measured in terms of GNP per head preferably on a purchasing power parity basis. In 1990 the UN published it's first estimate of a Human Development Index which combined statistics on two other indicators; adult literacy and life expectancy with income levels, to give a better indicator of human development. In 1991 average years of schooling was combined with adult literacy to give a knowledge variable. The index is scaled from 0-100. In conclusion, I think that although GNP may have many faults and is not an entirely accurate measure of economic activity, it is the best measure we have. GNP does not take into account the distribution of wealth within a country and a lot of things can be hidden in just giving a GNP rate of a country. ...read more.

The author mentions limitations that GNP has, but doesn't do enough to explain how these disadvantages can be taken care of. There are many measures of standard of living. There is also no distinction made between GDP and GNP. The author should also mention comparisons between different economies. For instance, GNP on its own has limitations in comparison with other nations because population and inequalities aren't taken account for.