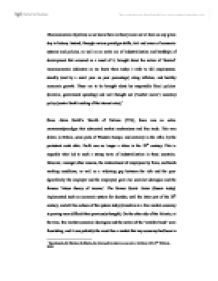 Russia vs Brazil, A Macroeconomic Comparison

Macroeconomic objectives as we know them in theory were not all born on any given day in history. Instead, through various paradigm shifts, trial and errors of economic systems and policies, as well as an entire era of industrialisation and hardships of development that occurred as a result of it, brought about the notion of 'desired' macroeconomic indicators as we know them today. I refer to full employment, steadily (and by a small year on year percentage) rising inflation, and healthy economic growth. These are to be brought about by responsible fiscal policies (taxation, government spending) and well thought out ('market aware') monetary policy (central bank's setting of the interest rates).1 Since Adam Smith's Wealth of Nations (1776), there was an entire movement/paradigm that advocated market mechanisms and free trade. This was driven in Britain, some parts of Western Europe, and certainly in the USA, by the protestant work ethic. Profit was no longer a taboo in the 19th century. This is arguably what led to such a strong wave of industrialisation in these countries. However, amongst other reasons, the mistreatment of employees by firms, and harsh working conditions, as well as a widening gap between the rich and the poor (specifically the employer and the employee) gave rise socialist ideologies and the famous 'labour theory of income.' ...read more.

This can be seen for the four countries in Latin American below, including Brazil. From 1975 to 1990, the average monthly inflation rate for Brazil rose by about 700%. These countries practiced various stabilisation programs, ranging from populist to exchange rate programs, some successful and some not. There were various reasons for this persistent inflation, of which a few are listed below. 1975-80 1981-85 1986-90 1991-95 Argentina 9.3 12.7 20.0 2.3 Brazil 3.4 7.9 20.7 19.0 Peru 3.4 6.0 23.7 4.8 Bolivia 1.3 17.7 1.1 1.1 Source: International Financial Statistics, IMF 1. Backward indexation3, which meant that buyers and sellers in the economy, knowing what the recent inflation rate had been, would factor that index into their prices, even if the inflation rate had gone down. This would contribute to increase in future inflation rates. This clearly made the monetary policy tool almost useless for the central bank. 2. With regards to fiscal issues, there was little success in raising tax revenues. Provinces were always in debt, looking at central bank for financing. 3. A great deal of the government debt was in foreign currency, and external debt to exports ratio was very high. This resulted in a external financing crisis. With significant external debt, its credit rating was very important and of course sensitive, if fear of risk of default emerged, Brazil lost external financing. ...read more.

Registered unemployment in Russia is now 2 percent, although surveys indicate that true rate actually lies somewhere between 5 and 6 percent. Similar to Brazil, there are also large amounts of capital flight from Russia. Many profits are invested outside of the country. Although Brazil suffers from lack of investment due to a bad fiscal reputation, and some level of corruption, Russia (in addition to corruption) suffers from lack of investment largely due to barriers to entry. Recently and oil and gas reserves found on the Eastern coast of Russia have been completely monopolised by them. International firms, willing to bid and invest to attain a piece of the activity, have been completely shut out. This does not add to 'good reputation' with regards to Russia's restructuring and transition. In a global economy, like the one we live in today, such mal practices can be very damaging for future foreign policy, and Russia is looking likely to suffer from that as well. In conclusion, one can state that no single set of macroeconomic policies are full proof. Rather the authorities implementing them need to be pragmatic and dynamic, being able to exercise the right instruments at the right time in order to achieve stability and healthy growth. Macroeconomic objectives cannot be achieved through the implementation of one instrument alone. It is often the case that a policy mix of some sort is required to achieve targets. ...read more.