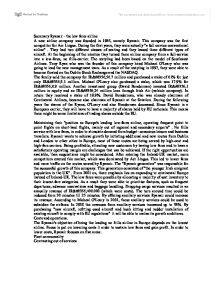 Ryanair - business analysis. What is the strategic position of Ryanair and how to maintain and strengthen their position for the future?

Summary Ryanair - the low fares airline A new airline company was founded in 1985, namely Ryanair. This company was the first competitor for Aer Lingus. During the first years, they were actually "a full service conventional airline" . They had two different classes of seating and they leased three different types of aircraft. At the beginning of the nineties they turned there airline company from a full-service into a low-fares, no frills-carrier. The restyling had been based on the model of Southwest Airlines. Tony Ryan who was the founder of this company hired Michael O'Leary who was going to lead the new management team. As a result of the restyling in 1997, they were able to become floated on the Dublin Stock Exchange and the NASDAQ. The family sold the company for IR?56.7 million and purchased a stake of 61% for just only IR?3.1 million. Michael O'Leary also purchased a stake, which was 17.9% for IR?0.9 million. Another investment group (David Bonderman) invested IR?1 million in equity and an IR?24 million loan through Irish Air (vehicle company). In return they received a stake of 19.9%. David Bonderman, who was already chairman of Continental Airlines, became also chairman of Ryanair at the flotation. During the following years the shares of the Ryans, O'Leary and also Bonderman decreased. Since Ryanair is a European carrier, they will have to have a majority of shares held by EU nationals. This means there might be some limitations of trading shares outside the EU. Maintaining their "position as Europe's leading low-fares airline, operating frequent point to point flights on short-haul flights, mainly out of regional and secondary airports" . No frills service with low fares, in order to stimulate demand from budget- conscious leisure and business travellers. Ryanair wants to achieve growth by initiating additional and new routes from Dublin and London to other cities in Europe, most of these routes are being served by high-cost and high-fare carriers. ...read more.

Threshold resources are needed to exist as a provider to any market segment. With threshold resources is meant the basic requirements, for example for Ryanair they need space otherwise their airplanes can not fly or land anywhere. Threshold resources change over time so it is important to continually improve this resource just to stay in business. For Ryanair examples of threshold services are the airplanes, the use of airports. Unique resources are those resources which critically underpin competitive advantage they can be used to meet the critical success factors. For Ryanair a unique resource is Michael O' Leary, and the unique cost cutting policy. (Johnson and Scholes, p 152 - 154, handout from cbl) Competencies. Competence is created when resources are 'deployed' into the separate activities of the organization and into the processes through which these activities are linked together. The main competence of Ryanair is that they provide flights at a low price. They do this for example by having a no-frills and ancillary service, fleet commonality, contracting services out, using secondary and regionally airports. Core competences. Core competences are those competences that underpin the organization's ability to outperform competition by meeting the critical success factors better than competitors. As Critical Success factors we named Innovation, Low-fare tickets, Punctuality and the website. For Ryanair their main core competence is their unique cost cutting policy. (Johnson and Scholes, p 149, handout from cbl) Performing better than competitors. An organizations strategic capability is a relative issue since it concerns the ability to meet and beat the performance of competitors. Managers need to understand performance standards; this means that they need to understand lies behind good and poor performance. For this understanding benchmarking is used. There are three ways of benchmarking: Historical comparison, Industry norms/standards and Best-in-class benchmarking. Historical comparison looks at the performance of an organization in relation to previous years in order to identify any significant changes. ...read more.

as b****y or Red Ocean Strategy . Ryanair seemed to follow a me-too strategy ; according to Osborne, K. (2005), they tried to be all things to all people . Even they started restructuring; their strategy was not enough differentiated and their cost advantage was too low to be profitable. Ryanair then created a competitive advantage through the alignment of the three components of business systems; 1)Creating superior value for their customers (outside perspective) 2)Supplying their superior value-adding activities in an effective and efficient manner (which jointly form the Value Chain ) 3)Possessing over the resource base required to perform the value-adding activities, (inside perspective) According to Porter (1987), corporate strategy is what makes the corporate whole add up to more than the sum of its business unit parts. It is seen to be concerned with the overall purpose and scope of the organisation and to meet the expectations of major stakeholders. All aspects of Ryanair s value chain are important to the company and their shareholders as Ryanair s decisions add value to both. The following report outlines the three perspectives of shaping Ryanair s business system. The value creation dimension of Ryanair s business model will be outlined, considering the theories of Porter and the more recent authors Kim and Mauborgne (2004). Further, the linkages in the airline s value chain and their resource base will be analysed, considering Hamel and Prahalad s (1990) core competency model (inside-out approach). In section 2, the future challenges of the airline are considered. Ryanair s strengths and weaknesses will be analysed, internal value creating factors such as assets, skills or resources, to consider how the airline can create alignment to its opportunities and threats, external factors. An stronger outside in approach for Ryanair s future corporate strategy will be considered, applying Porter s five forces model, placing the market, the competition, and the customer at the starting point of the strategy process. ...read more.