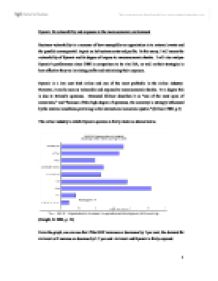 Ryanair - Its vulnerability and exposure to the macroeconomic environment

Ryanair: Its vulnerability and exposure to the macroeconomic environment Business vulnerability is a measure of how susceptible an organization is to external events and the possible consequential impact on its business costs and profits. In this essay, I will assess the vulnerability of Ryanair and its degree of expose to macroeconomic shocks. I will also analyse Ryanair's performance since 2000 in comparison to its rival BA, as well as their strategies in how effective they are in raising profits and minimizing their exposure. Ryanair is a low cost Irish airline and one of the most profitable in the airline industry. However, it can be seen as vulnerable and exposed to macroeconomic shocks. To a degree this is due to Ireland's openness. Desmond Gillmor describes it as "one of the most open of economies," and "because of this high degree of openness, the economy is strongly influenced by the external conditions prevailing in the international economic system." (Gillmor 1985, p.5) The airline industry in which Ryanair operates is fairly elastic as shown below. (Knight, B. 2006, p. 14) From the graph, one can see that if the GDP increases or decreases by 1 per cent, the demand for air travel will increase or decrease by 1.7 per cent: air travel and Ryanair is fairly exposed. A firm's average total cost curve (shown below) ...read more.

However, in this same period, Ryanair managed to launch new bases in Rome and Barcelona, launch 73 new routes, takeover their competitor Buzz for a knock-down price and carry more passengers than BA in the European market. The reason for the decrease in profits in 2008 was due to increases in fuel prices and significantly increased airport charges, particularly at their largest bases at Stansted and Dublin. British Airways, a competitor to Ryanair, has reviewed its short-haul operations and is planning to spend a portion of its marketing budget promoting shorter haul flights. However, they believe that services such as in-flight refreshments and business class seats are expected by their customers, and intend not to cut back on these services but focus on this differentiation and thereby create market imperfections. In the journal article titled "Easyjet and Ryanair flying high on the Southwest model", Chris Avery, an analyst at JP Morgan, believes that the answer to the threats from low cost airlines by BA has been perfect. They acknowledged that they were no longer the public's favored provider and have taken measures to, not only, protect their primary market, but also to learn from their rivals. With BA's key financial figures reported in British pounds and Ryanair's in Euros in their respective annual reports, there is difficulty in comparing them. ...read more.

This reduces market contestability and enhances profits. If they fail, this sunk cost can't be recouped. London to Genoa (GOA), Hamburg (HAM), Pisa (PSA), Stockholm, and Venice. (Pitfield, D. E. 2007, p. 78) The table above shows the market share achieved by Ryanair in 2003, in the first month and year of operation. "There seems to be a difference between the Italian destinations and the other two. However, the Venice route also looks closer in character to the other northern European destinations in that although the initial market penetration is good, it does not grow as rapidly as GOA or PSA. This is almost certainly because of the competition offered by easyJet from STN to VCE. It seems that where competition is less and a dominant market role is achieved, large market shares can be achieved. The resulting market share is less if there is more competition." (Pitfield, D. E. 2007, p. 79) Consequently, to mediate this threat against opposition, Ryanair could analyse their current routes and maybe switch from more competitive routes to those that are currently non-existent, for example, Norway.4 Finally, to increase its market share, Ryanair could seek to takeover a competitor. Having successfully taken over Buzz in 2003, Ryanair have mixed experiences with this strategy with two unsuccessful attempts to takeover Aer Lingus in 2006 and 2008. In the latter case, the approach was rejected due to valuation and competition grounds: "an aviation monopoly would not have been in the best interests of Irish consumers. ...read more.