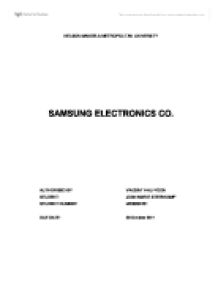 Samsung Case Study - the process of the introduction of new products

4 EXAMINE AND EVALUATE THE EXTENT OF CENTRALIZATION OF NEW PRODUCT DECISION MAKING AT SAMSUNG Samsung has a unique way of inventing new products. Managment sets a goal, and then does all it can to accomplish this goal. In order to make this happen, Samsung's chief executive, Yun Jong Yong, set up the Value Innovation Program. The Value Innovation Program (VIP) is a facility at Suwon. This is where specialists from all departments gets "locked up" for a couple of weeks to work on a project. These specialists brainstorm, design, argue, do the maths and finally create new products of value for Samsung and its customers. The teams work against a deadline, which ensures that they make difficult decisions in a timely manner as not to hinder product launch dates (Cravens & Piercy, 2009: 537- 538). 5 DESCRIBE HOW SAMSUNG HAS SUCCESSFULLY BUILT UP A GLOBALLY RECOGNISED BRAND BY REFERRING TO OTHER SOURCES Over recent years, Samsung has grown to become one of the leading home appliance suppliers. In 2009, the company's third-quarter profit doubled the total of its nine Japanese competitors combined (Samsung Electronics' Success, 2009). In 2010, the Financial Times (January, 2010) stated that Samsung Electronics has overtaken Hewlett-Packard as the world's biggest technology company in sales. ...read more.