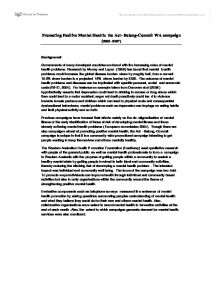 Promoting Positive Mental Health: the Act- Belong-Commit WA campaign (2005-2007) Background Governments of many developed countries are faced with the increasing rates of mental health problems. Research by Murray and Lopez (1996) has found that mental health problems could increase the global disease burden share by roughly half, from a current 10.5% share burden to a projected 15% share burden by 2020. The outcome of mental health problems and diseases can be implicated with specific personal, social and economic costs (WHO, 2004). For instance an example taken from Donovan et al (2006) hypothetically asserts that depression could lead to drinking in excess or drug abuse which then could lead to a motor accident; anger not dealt proactively could lead to violence towards female partners and children which can lead to physical costs and consequential dysfunctional behaviours; mental problems such as depression can impinge on eating habits and limit physical activity and so forth. Previous campaigns have focused their efforts mainly on the de-stigmatisation of mental illness or the early identification of those at risk of developing mental illness and those already suffering mental health problems (European commission 2004). Though there are also campaigns aimed at promoting positive mental health, the Act- Belong,-Commit campaign is unique in that it is a community wide promotional campaign intending to get people wanting to keep themselves and others mentally healthy. ...read more.

Macro-environment factors have influences including legal forces, political forces and cultural factors. Strengths * Project officers encouraged community organisations apply for funding through governmental grants in exchange for their partnership. * Culturally, there are growing trends for an increasingly convenience orientated lifestyle. Messages to get active in three domains were at risk of being rejected without effective communication of the benefits of positive mental health. Also a great proportion of society believe.. * Today's technology inadvertently makes public poor mental health practices through popular media : movies, video games, television and music. Such alternate behaviours being advocated are pro drug and excess alcohol consumption. Conversely, improving technological forces give rise to external opportunities as sites such as facebook are social networking tools that help this campaign by allowing for social events to reach out to more people within the community. * For journalists, the primary objectives were to establish relationships to facilitate wide coverage of local events held under the Act-Belong-Commit logo. Target Audience and Behavioural objectives The campaign targeted mainly two groups. The primary group were adult populations in regional Western Australia and organisations in six communities that would facilitate activities with the potential of aiding people's mental health. For example, recreational clubs, walking groups, libraries etc. Another group is the journalists The secondary target group were children and adolescence in this town whose behaviour is directly impacted by the mental health of the primary target market. (is there another group?) ...read more.

taking of illicit drugs or drinking alcohol in excess). The audience of this campaign may perceive a number of benefits from the above activities. Watching television or browsing the internet for extended periods of time may be seen as a way to pass time, as well as sometimes being educational and interesting. Television and such inactive forms of pastimes are also usually turned to by those who don't seek (or aren't given the opportunities) more beneficial activities. In regards to the damaging activities such as substance abuse, perceived benefits are that some people may feel more accepted by their peers if they indulge in such activities. Others use substances such as illicit drugs and alcohol as a means of escaping reality, however short lived this effect may be. While these perceived benefits do exist within the target audience, costs are visible to them also. Costs of inactivity include negative health effects, lost productivity and degrading social relationships. Some people associate such inactivity with negative mental effects as well. Substance abuse also has costs that are recognised by the audience. Such associations include adverse health effects, lost social relationships, increased financial strain and a chance of criminal action against those who undertake in such activities in some cases. Positioning Statement We want individuals and organisations within the community to see that to keep mentally healthy by engaging in social and cognitive activities are essential to the wellbeing of common, at risk and individuals already suffering with mental problems. ...read more.