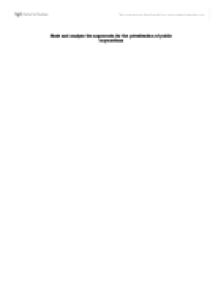 State and analyse the arguments for the privatisation of public corporations.

State and analyse the arguments for the privatisation of public corporations Privatisation is the transfer of the partial or complete control of a state activity and related assets to a private investor or investors. According to Steve. Hanke privatisation can take place in a variety of forms such as 1) Contracting out 2) Partnership in the ownership, control, management of enterprises by the public and private sectors with various ownership structures 3) Total divestment and marketization of public enterprises thus turning the whole organization over to the private sector A public enterprise is defined by CARICAD studies as " an institution either wholly owned by Government or in which Government owns a majority share, that sells goods and services in the market and has its own management entrusted with the task of running the organization."1 There are many strong arguments for the privatisation of public corporations which can be studied in four categories of Economic, Ideological and Political and Organizational. Before these arguments are discussed it is critical to give a brief overview of the emergence of privatisation in the world. In developed and developing countries, privatisation is one of the most revolutionary innovations in the recent history of economic policy. The policy of privatisation of public enterprises has been adopted and implemented variably at the global level since the 1980s. ...read more.

Under its industrialisation plan the government had nationalized a major foreign owned bank, Barclays and the cement manufacturing plant. "By October 1980, public ownership had extended to the areas of transportation, communications, agricultural and land development, tourism, housing and trading."7 However the aggressive expansion of the public sector failed to achieve its stated objectives. In October 1980, the JLP was reinstated by a landslide victory as the government of Jamaica. The size of the government and the policies pursued in the 1970s were regarded by the JLP as the main constraints on economic growth and development. The new government therefore assumed power in October 1980 to reduce the role of the public sector through deregulation, divestment of public enterprises and reduction of government expenditures. The JLP manifesto had stated the intention to "create a market system of economics... to shift unnecessary public enterprises to the private sector so as to remove the burden of finance from Government."8 This new political venture was also greatly welcomed by the IMF and the Reagan Administration in the U.S.A. It was viewed that the future of the Jamaican economy greatly depended on reduced government involvement and renewed private sector influence. Some examples of the privatisation measures are stated below. In December 1986, 51% of the equity in the National Commercial Bank (NCB) ...read more.

On the other hand, management in PEs have vague, fluctuating and often conflicting objectives. The reader must also be aware of the arguments against privatisation. It must be noted public enterprises still have a purpose in society. A PE gives the state control over monopoly power and profits in those areas where monopoly is unavoidable. For example, utilities such as water and electricity. Most opponents of privatisation indicate that privatisation is not always the answer as it corrupts the marketplace. Economic efficiency is concerned with the utilisation of scarce resources. Most private sectors reach certain levels of economic efficiency but they incur social and externality costs such as pollution and unemployment compensation. The government also incurs infrastructure costs. Also, privatisation does not necessarily mean that goods and services will be provided more cheaply or efficiently by the private sector than by the public sector. Public sectors play key roles in the development of countries but they manifest many problems as they are slow at developing and introducing new technologies and they are subject to over-frequent and damaging political intervention. Privatisation seems to offer a means of ridding the state of the financial burden of loss-making activities, while at the same time spreading share ownership. Privatisation when correctly conceived and implemented fosters efficiency, encourages investment, new growth and employment and frees public resources for investment in infrastructure and social programmes. ...read more.