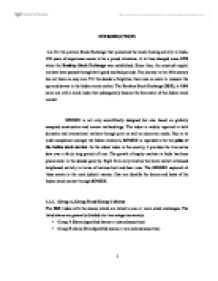 INTRODUCTION 1.1. For the premier Stock Exchange that pioneered the stock broking activity in India, 128 years of experience seems to be a proud milestone. A lot has changed since 1875 when the Bombay Stock Exchange was established. Since then, the country's capital markets have passed through both good and bad periods. The journey in the 20th century has not been an easy one. Till the decade of eighties, there was no scale to measure the ups and downs in the Indian stock market. The Bombay Stock Exchange (BSE), in 1986 came out with a stock index that subsequently became the barometer of the Indian stock market. SENSEX is not only scientifically designed but also based on globally accepted construction and review methodology. The index is widely reported in both domestic and international markets through print as well as electronic media. Due to its wide acceptance amongst the Indian investors; SENSEX is regarded to be the pulse of the Indian stock market. As the oldest index in the country, it provides the time series data over a fairly long period of time .The growth of equity markets in India has been phenomenal in the decade gone by. Right from early nineties the stock market witnessed heightened activity in terms of various bull and bear runs. The SENSEX captured all these events in the most judicial manner. One can identify the booms and busts of the Indian stock market through SENSEX. 1.1.1. Group A, Group B and Group C shares The BSE trades with the shares which are listed in one or more stock exchanges. The listed shares are generally divided into two categories namely: * Group A Shares (specified shares or cleared securities) * Group B shares (Non-Specified shares or non-cleared securities) Group A Shares represent large and well established companies having broad investor base. These shares are actively traded. Naturally these shares attract a lot of speculative multiples. ...read more.

This is a passing phase, so hold on to your stocks and do not sell or buy in panic and excitement". -Vinodbhai Shah. Malad 7.4.3. Property is a good bet: "Property rates are soaring and so that is where I'm investing. I don't see real estate prices de-escalating in the near future. It's the safest bet". -Jignesh Parikh. Matunga 7.4.4. Some stable stocks here: "If you wish to invest in stocks, go for financial technologies and infrastructure. Despite the ups and downs in the market, these stocks have been doing really well. If you are so eager to invest in these volatile conditions, I advise you to consider only these segments of the market". -Nirali Shah. Andheri 7.4.5. Gold it is: "Investing in gold will always ensure good returns. After the setback I faced when the Sensex crashed recently, I have decided against investing in the stock market. Even the experts say that gold is the safest form of investment". -Urvi Gandhi. Borivali 7.4.6. No need to worry: "The Sensex will keep fluctuating. It's part of the game. Just because the market is fluctuating doesn't mean that one shouldn't invest. I understand people's apprehensions but one doesn't stop living for the fear of dying. Having said that, I'm very positive about the overall investment scenario". -Mayur Patel. Goregaon These are the suggestions for the investing class of people to face the fluctuating Sensex. CONCLUSION . The study has revealed the investors' attitude and reactions towards Sensex fluctuations. The investors in Madurai city are generally conservative. They are not willing to take more risks to earn higher profits. They are ready to trade safely without being trapped by the volatile Sensex. The stock brokers also are in a dilemma in predicting the future of this Sensitive Index. To conclude with, Sensex, by nature, is meant to fluctuate. After all, trading is affected by several factors like politics and economic policies. We can't expect it to stabilize till these factors have stabilized, which is impossible. So it is up to the investors to manage and make themselves a part of the volatile Sensex. ...read more.